A picture is worth a thousand words, so a video must be worth a book thick like “Game of Thrones.” While I am still doing screen capture regularly through the day with my best friend Greenshot, I have grown more and more finding myself needing a nice and easy-to-use video recording tool to capture what’s happening on the screen. After I kept my notes along the way with my search and testing, I think it’s time to share what’s been good out there that don’t cost you a dime to use.

Here are 6 of them to start. But as usual, we will always come back, do a review, and update what’s been changed. All tools below work on both Windows 7 or 8 systems, 32-bit, and 64-bit unless otherwise noted.

Since it’s for Windows, let’s start with what Microsoft has to offer. Expression Encoder 4 is an advanced audio/video encoding application that also does screen recording in its free version. It’s a 2-step process, you need to record the screen first and push the recording to Encoder for further editing and outputting. The original recording is saved in Expression Encode format and you can review what’s recorded within the tool. And the final can be saved as Windows Media .wmv format. 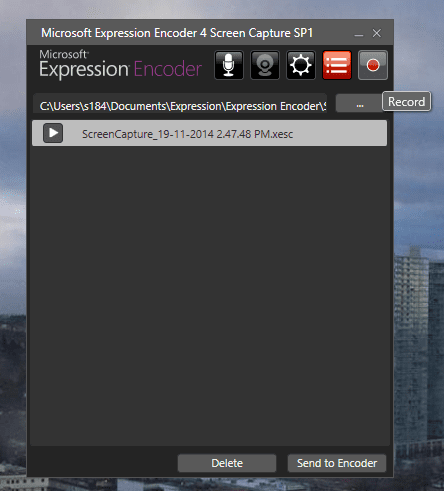 Ezvid is a very easy to use all-in-one screen recorder and video creator with a straightforward user interface to work with. With one click, you can record your screen with the app, and capture whatever appears on your computer screen: Web pages, games, applications, paint programs, maps, you name it. Ezvid also allows you to add slides, change the playback speed of your video, and make overlaid annotations. 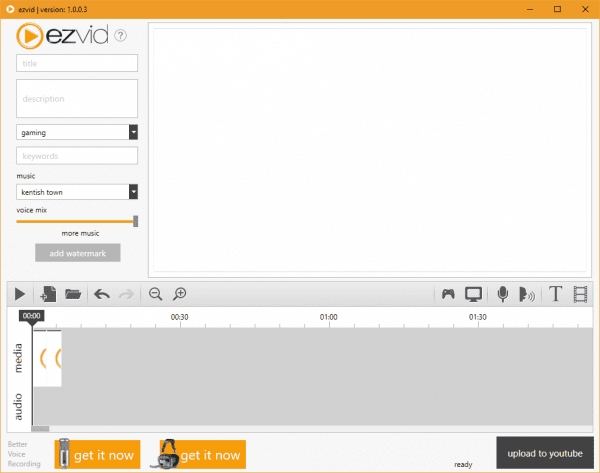 TinyTake is a cool 2-in-one tool that does not only screen capturing but also video recording. You can also annotate what’s been recorded and get them shared out with other people very easily. Similar to Community Clips, when it runs, it sits in the system tray wait to be fired up. Right-click the icon on the system tray, and choose one of 3 options to start video recording, video from desktop, video from webcam or image from webcam. You can do so through the keyboard shortcuts as well if you remember them. 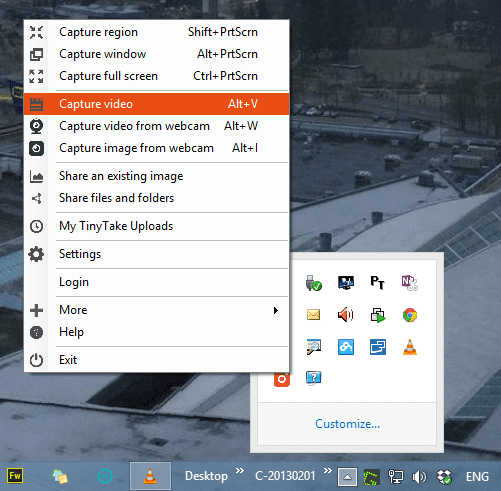 The recording can be saved in the cloud, which you will need to register a free account first, or locally on your computer, in MP4 format. You can record up to 2 hours of content if you are saving it locally. 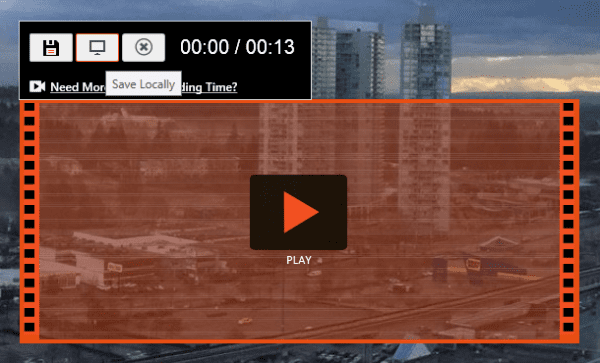 Open Broadcaster Software, commonly known as OBS, is one of the popular ones out there when it comes to free screencasting. It’s not only for video recording but also for live streaming as well, with features including: 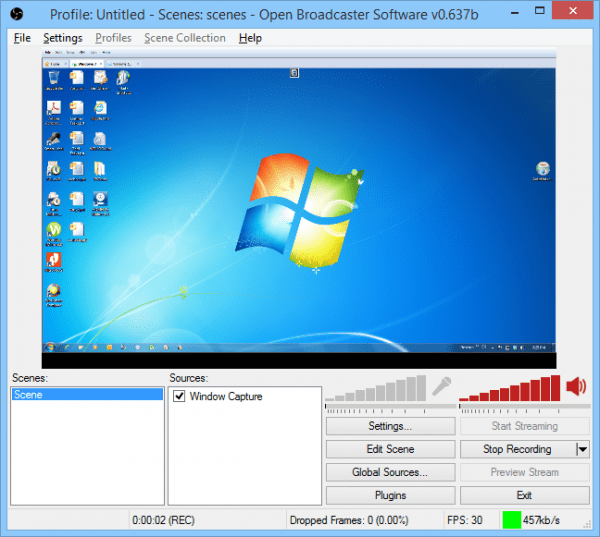 Yes, that’s right. VLC has a screen recording feature built-in that you can use. It’s useful especially when you have VLC installed on your computer already.

Go to Media → Open Capture Device, set the Capture mode to Desktop and 15.00/fs as desired frame rate and Click the little down arrow next to Play button, select Convert. 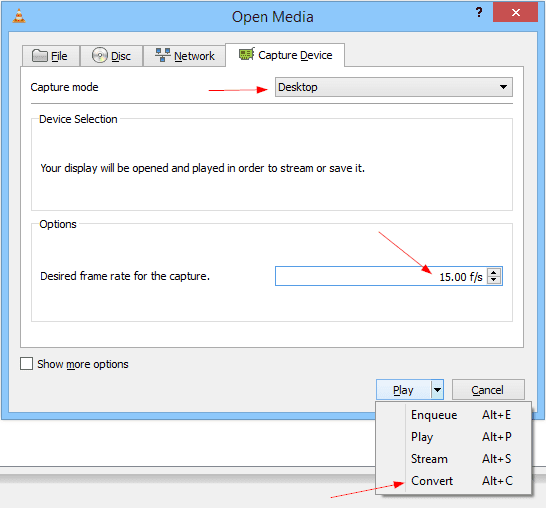 Specify the destination path and file, and click Start button to start recording. The file can be saved in multiple formats, MP4 is recommended. 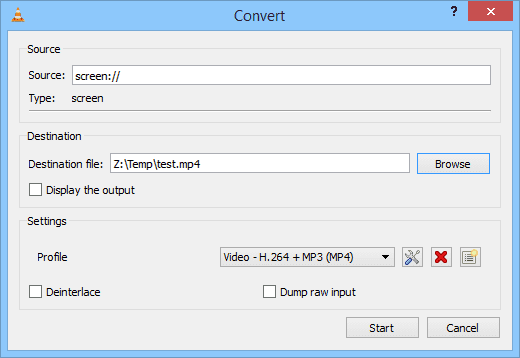 Screen O Matic offers both a Windows Client and a Web-based screen recording feature. It’s a quick and easy one for those who don’t want to mess up with loads of video recording settings and setup. Just simply launch and go with a single click. It supports MP4, FLV, and AVI format is capable of recording screen or screen and webcam the same time. You can also push the output file straight to YouTube if you want to.

The short part is that the free version only allows you to record up to 15 minutes of content. Most of the time, it seems to be sufficient anyway. 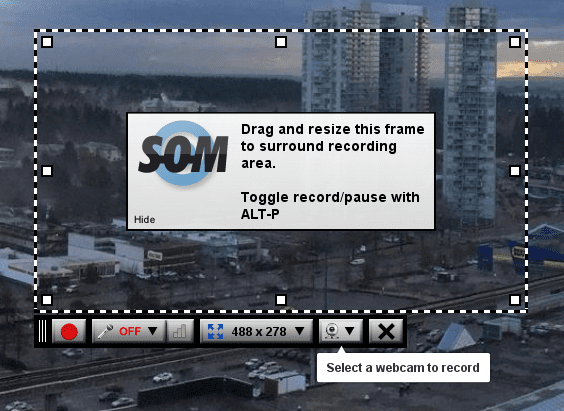 If you are running Windows 10 on a supported hardware, it’s a lot easier to do the screencast. Simply press Win+G and follow the instruction on the screen.

How to use Game bar to do screencasting on Windows 10

So, what do I choose?

If you are using VLC, and only need to do screen recording periodically, why not just using VLC without installing another piece of software on your computer?

If recording a full screen isn’t enough, go with TinyTake or OBS.

If you need more editing features after the recording, try out Microsoft’s tool, Expression Encoder.

If you like a quick and dummy tool that records less than 15 minutes of video, Screencast O Matic is the way to go.

However, if installing another piece of software doesn’t sound attractive, there are free web apps that can do screen recordings too, such as Screencast O Metic, Screenr, and Apowersoft Free Online Screen Recorder.

And if you are one of the early Windows 10 users, do you know Windows 10 has the screencast capability built right in the system?

That’s it for the day. Enjoy and happy screencasting.