Who doesn’t love the dual-monitor setup on your work desk? With Windows 8, you will probably love it even more. The added new dual-monitor features make a use of Windows 8 on a non-touch screen equipped desktop truly enjoyable.

Here are 7 tips that you must know when using Windows 8 with 2 or more screens.

When selecting a personalization theme, Windows 8 is smart enough knowing to put a different wallpapers on each monitor. You can also specifically pick which pictures showing on which screen.

In Desktop Background window, right click the picture and choose which monitor to show off. 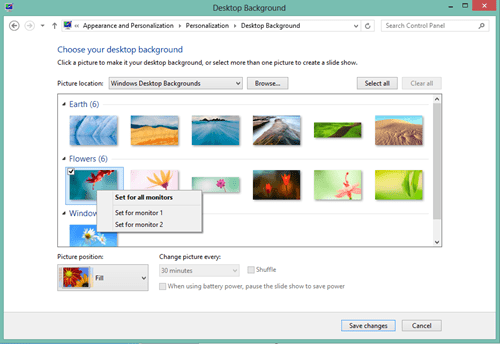 What’s even more intelligent is that if the dual-monitor setup that consists of two different size of screen windows 8 automatically selects the best suited images for each size of monitor.

Tip 2: Span the wallpaper across all monitors

Windows 7 doesn’t have this nice feature, but you can work around it with tips like this and this. With Windows 8, this is supported natively.

Simply pick a picture that is wide enough to cover both monitors, and choose Span in Desktop Background window. 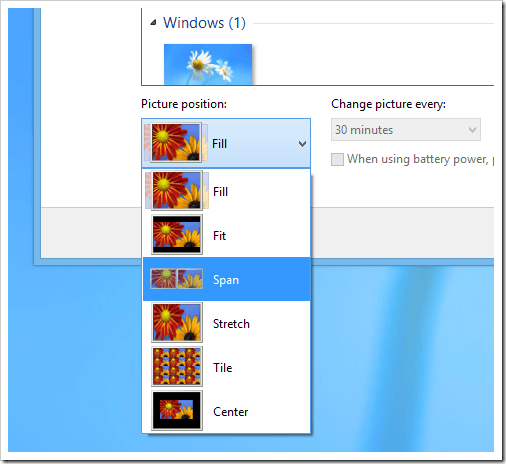 Tip 3: Taskbar natively across all monitors

The option “Show taskbar on all displays” is enabled by default, with 3 options to choose from. You can alter them right in Taskbar Properties screen (right click the taskbar and choose properties). 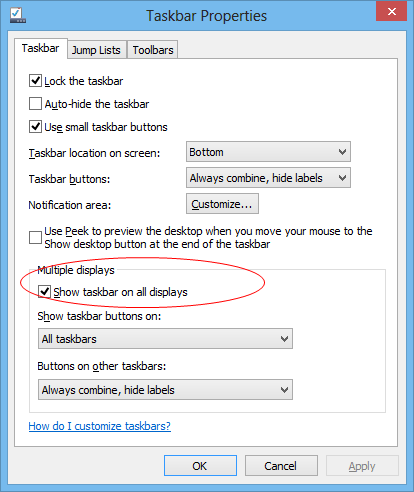 Simply move your cursor to the up left corner of any monitor to bring up the App Switch List and switch the app from there on the same monitor.

Move your mouse to the top edge of your app, drag and drop it across monitors. This nice useful feature works for both full screen and snapped apps. For desktop apps, just simply drag the top window frame between monitors.

The Win + Arrow and Win + Shift + Arrow still continue to work on desktop apps for snapping and moving desktop windows across monitors.

Windows 8 was just an enhanced version of Windows 7 to me until I hooked up a second monitor to it. I can now have one Windows 8 on one monitor and my main desktop on another. With app snapping, I can have 2 apps running side-by-side on one screen while still keeping my desktop apps running on another. Well, A tri-monitor setup seems to be even better so that I can one dedicate to Windows 8 apps with other two accommodating all my desktop apps.