Rootkit, a stealth type of malicious designed to hide itself under the hood of other normal programs to keep from being normal methods of detection, is often difficult to be detected. Even if it’s detected, the removal process most of the times can be complicated or even impossible, especially when the rootkit was injected in the kernel. What’s more annoying is that they can be slipped away easily from the anti-virus programs you are using and hoping to catch all the bad guys. 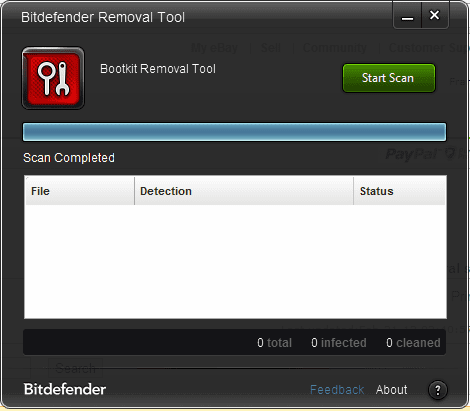 Unlike other rootkit removers, it can be launched immediately without going to the safe mode first. However, you may still be prompted to do a reboot in order to carry out a complete cleanup. The rootkits known to this tool includes Mebroot, all TDL families (TDL/SST/Pihar), Mayachok, Mybios, Plite, XPaj, Whistler, Alipop, Cpd, Fengd, Fips, Guntior, MBR Locker, Mebratix, Niwa, Ponreb, Ramnit, Stoned, Yoddos, Yurn, Zegost and also cleans infections with Necurs (the last rootkit standing). And the new rootkit families are added as they become known.

A few things to remember though

Bitdefender Rootkit Remover is only a dedicate tool that removes the known rootkits you may have in your system. It cannot replace your regular anti-virus system and doesn’t provide any protection to prevent your computer from being infected in the first place.

Only use it when you think your computer might be infected by a rootkit that’s not detected by your other anti-virus program. And do use it even if you only have a glimpse of doubt about your machine.

Before you run the tool on your computer, download the latest version from its official website to make sure you are using the one that covers all known rootkit families.

Bitdefender Rootkit Remover is a portable tool that doesn’t need any installation. It works on all popular Windows versions, from XP all the way to Windows 8. Both 32-bit and 64-bit edition are supported.

How to Bypass “Windows Can’t Open This File:” Dialog Box in...

How To Get Linux Command Sudo, Kill on Windows