If you haven’t already known that Windows 7 has a native virtual WiFi built-in that can natively turn your Windows 7 machine into a WiFi hotspot, you probably can skip that part because now you have a better and easier way of doing so.

Connectify, a software that turns your Windows 7 system into a WiFi hotspot, released a new version 3.1 that includes quite a few improvements with a better user interface, comparing to the version we covered before.

It’s by far the simplest software yet quite feature rich to bring the hotspot into the Windows system. You just simply download the software, install it, and you are pretty much ready to go after providing the name of the Hotspot and the password to connect. Well, of course, the prerequisite to run this software and turn your Windows 7 system into a WiFi hotspot is to equip a Wi-Fi device. If the Wi-Fi device is compliable you can share the Internet and the hotspot with the same network device. Otherwise, you will need a wired Internet access to fully function your hotspot. 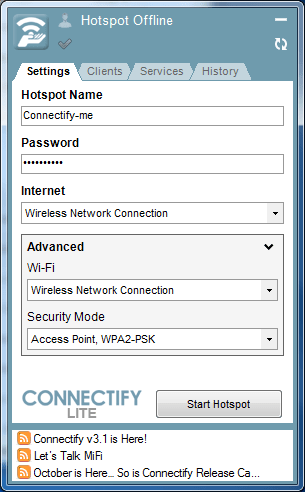 The biggest change to the Connectify is the new release of Pro version since 3.0, I believe. It’s a paid version on a subscription basis with a bunch of pro features, of which the most noticeable one is the support of 3G/4G tethering. You can easily spot them all being locked up in the Services tab in the program. 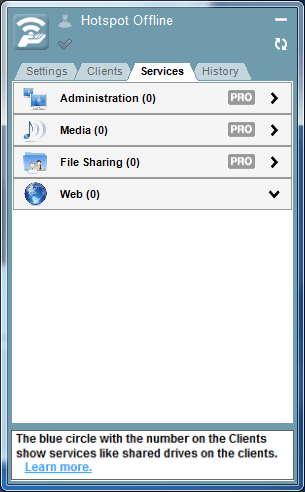 The Pro version costs $29.99US with one year of premium support and upgrade. Even though with many new advanced features, you don’t necessary need it to have your own functional hotspot on your Windows 7 system. Frankly, in most cases, the Lite version works just perfectly fine.

Connectify is one of the tools that are constantly running on my laptop. I just hope the Lite version is going to be there in the future releases.