Home Tools Desktops Provides You More Desktop Real Estate By Offering Up to 4...

If you constantly feel the lack of desktop real estate when working on your computer, you may want to give this free tool, Desktops, a try.

Desktops is a free utility tool, part of the famous Sysinternals toolkit,.developed by Mark Russinovich and Bryce Cogswell. The tool offers you more desktop spaces by providing you up to four virtual desktops, including the primary one you are currently using right now. You can then separate your applications to better organize them. For example, surfing the web on one desktop, reading and replying emails on the second, testing new software on the third, and working on your project on the fourth.

Desktops is also a portable tool that does not require an installation process in order to run it. You can simply download, extract the executable file from Zipped file, and run it. When it is first launched, it pops up the option window so that you can set up the hotkeys that will be used to switch between the virtual desktops. You can also set so that the tool can be run automatically at logon. 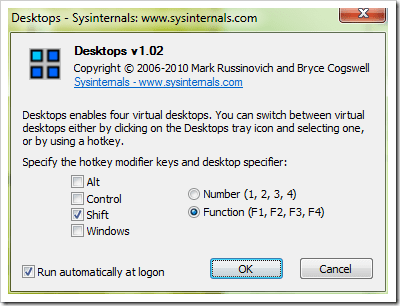 Desktops can be smoothly run in Windows 7 on both 32-bit and 64-bit editions, however, with some limitations.

First, There is no way moving one window from one desktop to the other.

Second, because each desktop has its own Explorer process running to provide each desktop a dedicate taskbar, and start menu, most of the tray applications are only shown in the first primary desktop.

Third, Aero seems only available on the first primary desktop, but not on the rest of ones.