Home Tips & Tricks Dive A Little Deep in Jump List plus How to Create your...

We have touched the Jump List a little on 7 tips on task bar in Windows 7, and thought we should dig a bit of deeper as it’s one of the new nice feature come from Windows 7. First of all,

Jump Lists—new in Windows 7—take you right to the documents, pictures, songs, or websites you turn to each day. To open a Jump List, just right-click a program icon on the Windows 7 taskbar. (You’ll also find them on the Start menu.)

As you can see, a Jump List is a list of files, folders that are completely related to a specific program, which means you can have different Jump List for different programs, as long as the program supports it. For example, IE 8 shows the frequently-viewed links on its Jump List while Windows Explorer has its own set on his. Better, if your Jump List missed a favorite, you can simply drag the file or folder and drop to the program pinned on task bar to pin them onto it. 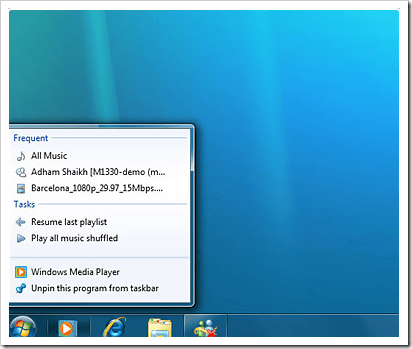 While it’s a good feature gathering all frequently used files together, it’s not possible to do the same with applications. However, people at gHacks found a workaround that you can actually do so with a little free tool called Jumplist Launcher, see the detail of how to use the program below.

If you are a Windows developer, you should start looking into the documents and integrating this new feature into your software that will be more compatible and more user friendly running on Windows 7. 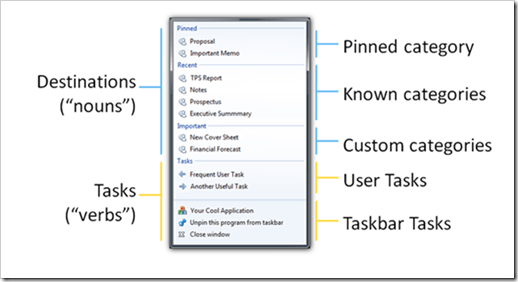 To create a custom Jump List simply open the program, drag and drop any file, programs, folders into the list. 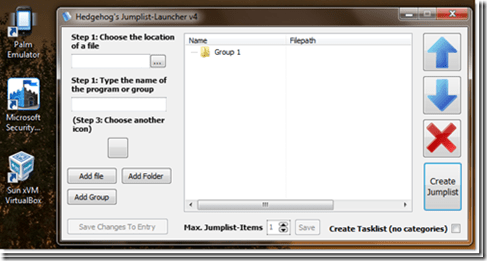 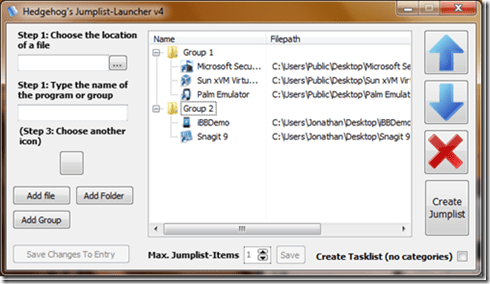 After you’ve done choosing the items you want to put into the Jump List, click “Create Jumplist” 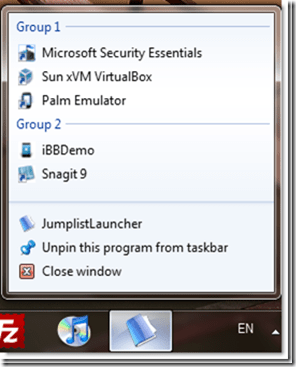 You can also rename the group name, rearrange the order, rename the program name etc.

Some of the features

– no installation and rubbish in the registry
– Creates jumplists with up to 10 60 programs or files which can then be directly started
(Warning: The setting Max. Jumplist-Items changes the number of possible entries globally for
the whole Windows-environment)
– the jumplist entries can be grouped
– after creating the jumplist, no program needs to run in the background
– you can have multiple Jumplist-Launcher-Icons (with different files/programs) on your superbar by copying the folder
– files can be dragged into the Jumplist-Launcher from Windows-Explorer
– Icon and name of the entry can be customized
– Jumplist-items can be added by dragging single files on Jumplist-Launchers taskbar-icon while holding the shift-key