Home Tools Encrypting Your Dropbox, SkyDrive, Box, or Google Drive On The Fly

Dropbox is awesome, but it doesn’t encrypt your data before transferring them to the cloud. Not that I don’t trust Dropbox, in fact, I trust them fully regarding the data safety. But it would be nice if the data are gibberish to anyone else other than me. And the concern applies to many other cloud services as well, such as OneDrive, Google Drive, etc.

BoxCryptor is a cryptographic virtual harddisk that encrypts all data on the fly using the AES-256 standard. Encrypted data is stored in an arbitrary directory of your choice. For example, one that is synced to the Dropbox.

So how exactly it works?

Assuming you’ve already had Dropbox installed on one of your computers. Once you also have BoxCryptor installed, select the default Dropbox folder as the source directory that stores the encrypted data, and assign a drive letter, e.g. X to it.

Click OK, and type in the password used as the key to encrypt the data. Note that this password will be used on the other computer you are sharing data through Dropbox. Once done, you will see a virtual drive appears in the Windows Explorer after this, as well as a quick access point right in the Favorites. 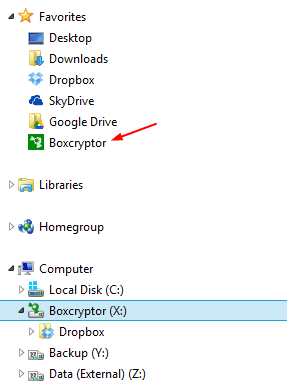 From now on, start dropping files to X: drive instead of Dropbox folder as you normally do. The data you dropped to the X: drive will be encrypted automatically on the fly and put in the Dropbox folder.

Here I dropped two files into X: drive Dropbox folder, all shown in green after being encrypted.

When you look them again in your regular Dropbox folder, they have .bc extension name attached indicating they are encrypted by Boxcryptor.

And you won’t be able to access them without Boxcryptor. But on the other computer that has both Dropbox and BoxCryptor installed, these two files automatically got downloaded and decrypted.

It works quite magically.

The password is the key information to access your encrypted data. Because BoxCryptor never sees and stores your password, you won’t have the option to retrieve or reset it if you forget it. It’s simply that if you forget the initial password you set when you sign up, you will loose the access to your encrypted data. It’s your own responsibility to remember this piece of vital information. In fact, one of the steps you have to agree on during the initial setup, you will have to check to agree on this agreement before using the service.

How many platforms are supported?

One thing I complained was the lack of a broad range of supported platforms. Not anymore. Now the cloud services it supports include Dropbox, OneDrive, Google Drive, Box, and SugarSync. And you can run it on all main platforms, including Windows, Linux, OS X, iOS, and Android. Pretty amazing.

What’s the catch then?

The only catch seems to be its pricing model, which still offers a free package that offers AES-256 and RSA encryption with a limitation that you can only use one cloud service at a time, meaning that if you have both Dropbox and SkyDrive installed, you can only use one with Boxcryptor at a time. You will have to sign up for an annual subscription plan, $48/year for unlimited personal use or $96/year for unlimited business use, if you want to use more services on multiple devices.

Well, when will this run on Windows Phone and Windows RT?