FancyCache, as its name implies, is a fancy software based cache scheme that utilizes the system memory to provide Windows another layer of data caching system. It improves your system performance by transparently storing data into memory so that the future requests for the same data can be performed directly from the memory. And here is how basically it works. 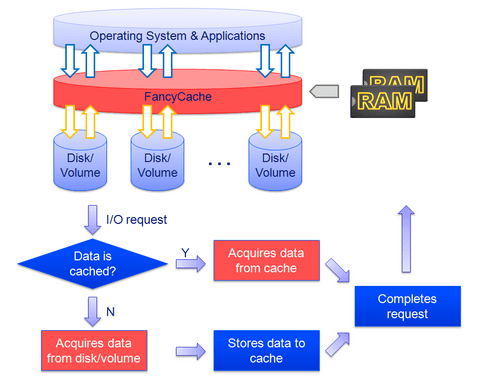 Hence, logically thinking, the larger cache size you assign, the more data can be stored. The more data are in the cache, the better performance you will get. Since the cache is created inside the memory, theoretically, the longer you computer runs, the better. FancyCache has its own algorithm that determines which blocks of data to be discarded to free the room for the new data to overwrite, and strategy that choose what data to be cached in the first place, which improves the intelligence of the program.

FancyCache offers two editions, one for the volumes (partitions) and one for the entire disk. There will be no different if you only one have partition on your system. It’s currently in beta so you can test it out for free, though the beta version will still expires in 180 days. You will also need to obtain the free license key file from the website in order to run the beta version. It’s uncertain whether the program will remain in free once it’s out of the beta. 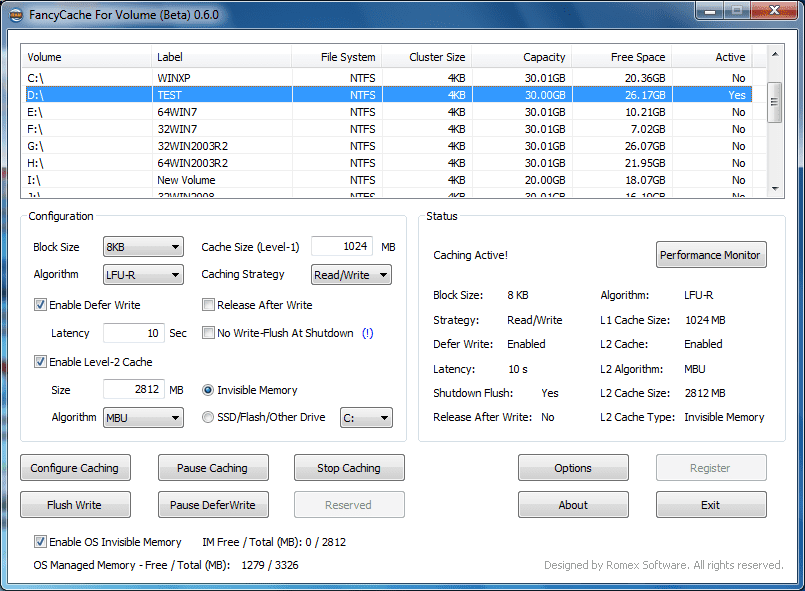 Why do I need it?

You may ask why we need another caching system while Windows is already doing a good job of utilizing our RAM to optimize the overall performance pretty well. Well, here are a few cases where you will actually appreciate a tool like FancyCache.

1. If you are using a 32-bit of windows on a machine that has more than 4G of RAM installed, you can use FancyCache to utilize these wasted RAM, since 32-bit can only handle up to 4G of them.

2. If you are using SSD on your system, you can have FancyCache to expand your SSD’s lifespan by reducing the number of writes to them. Basically, FancyCache has a feature called Defer Write. When it’s on, it consolidates multiple writes that target to the same address into one writes to reduce a lot of redundant writes. It also supports TRIM command natively to avoid writing the deleted data back to the drive.

4. It also helps maintain a good performance when you have write-intensive programs running on the same computer, like streaming server, video processing, or database.

FancyCache works on both Windows desktop and server platforms, both 32-bit and 64-bit editions are supported. It’s definitely worthy a serious consideration if you are looking for something to give your disk operations a boost.