Home News Google Reader is Gone, and now What?

Google Reader is dead, which unfortunately, is not an early Apple Fool joke. It’s a done deal that we all have to face. It’s sad having to say good-bye to a product that has been part of our online life for many years. But the reality is that it’s been out of the active development probably for a couple of years now. We do see some small tweakings here and there but when was the last time you see a big update? The same Reader layout has been the same like forever. It’s a deal we should have seen coming anyway.

Google is just doing what they believe should be doing. Look at the core products Google is focusing on right now, Android on mobile devices including tablets, Google+ on social media, YouTube, Gmail, Google Drive, Search, Map, etc. We do still see cool new products coming out like Google Glass and Driverless car but more of the things they do is to integrate. We’ve seen Google Drive integrated with Gmail, Picasa integrated into Google +, and we will be seeing a lot more. It’s now a world in which a single product can’t win a battle anymore. You will need to combine what you have to win the world and for all. Come to think of this, it’s fairly understandable why Larry Page’s Google wants to dump Google Reader. It’s an obsolete product that doesn’t fit into Google’s big map anymore.

If you are still like feeling too sorry to let it go, you can sign up the petitions here, here, and here to at least letting Google know how many people out there loved something they are killing. But good luck with that. I am going to just say RIP, and move on. 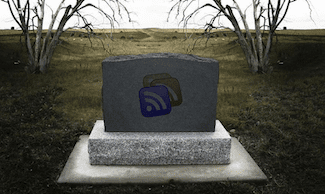 It’s fairly easy to export all my feeds from Google Reader. You can even use Google Takeout to get the extra data like sharing, starring posts. But the real problem is to find a relatively good replacement. My goal of a good feed reader has to meet the requirements like:

Google Reader is the only one that has done that. There is a good list of available alternatives already posted by Martin at ghacks.net. I will take look the list more closely late one and may test a few that look good. But by a quick glimpse of the list, I don’t find any impressive.

Maybe that’s a good entry point and an awesome news to a good startup. Google expressed that the main reason to put the popular Reader to rest is because the decline of the subscribers. Well, maybe the number is low and too small to the big giant. But according to this Data Points about Google Reader by Google Operating System blog, the number of total subscribers on Google Reader is big, big enough for a startup having a good solid loyal user base. It’s a very convincing number for people to seriously think about jumping into a good field dumped by Google.