Home How to Guide On Fix Mac TrackPad Multi Gesture Not Working in Windows 7...

Last week, Apple finally released a new version of BootCamp, BootCamp 5, which now added support for Windows 8. At least Apple claims that they have support for Windows 8. The thing is, you can install Windows 8 with previous version of BootCamp by pointing to install as Windows 7 using Windows 7’s drive. Windows 8 works, with some sluggish trackpad issues and some other device issues depending on what kind of Mac you have. I was very excited about the new version of BootCamp, but unfortunately Apple did not fix the issue with its trackpad. It’s still very sluggish, no use of multi-gesture what’s so ever. This was primary the biggest issue I’ve faced before when running Windows 8 on a Mac, hence the conclusion was that installing as BootCamp but using the BootCamp partition to run as a virtual Machine. This way you will benefit the same multi-touch gesture from the trackpad in Windows environment.

TrackPad Have a Native Driver for Windows 8 and Windows 7

It’s Trackpad++ ,device driver for Apple’s Multi Gesture trackpad. According to the developer, this is the first and the only driver out there for Apple Multi-touch Trackpad on Windows 7 and Windows 8. It allows you to use two, three and four finger gestures to perform tap, drag, scroll, show/hide windows and many Windows 8 specific gesture events.

Here is How to Install it on Windows 8

Note: before we start the installation process, if you have a wireless Trackpad, stop. It will not work, this driver only works for build-in trackpads on MacBook Pro/Air.

2. Download and install Trackpad++ Driver and Control Module, it is recommended to turn UAC off.

During the install you might run into prompt from Windows security, since this driver is self signed. 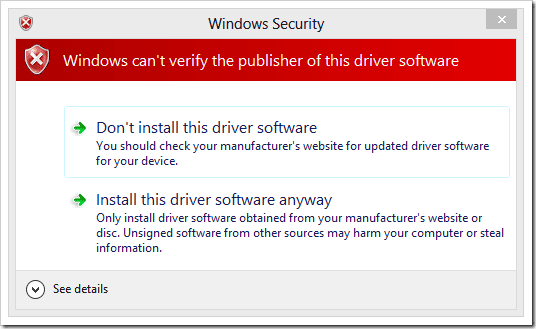 If you do see this, just choose “Install this driver software anyway”. During the installation your Mac will restart couple times, this is normal. 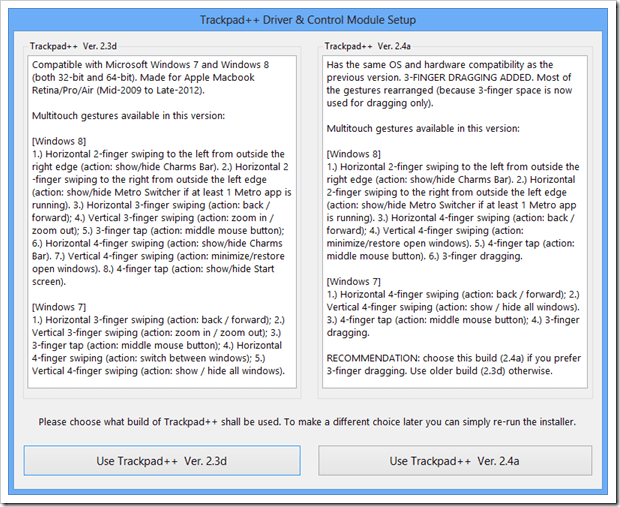 3. Pick and choose the type of version you’d like to use, I’m using Trackpad++ Ver. 2.4a. The difference are as shown in terms of how the driver handles you multi touch gestures and the corresponding events. 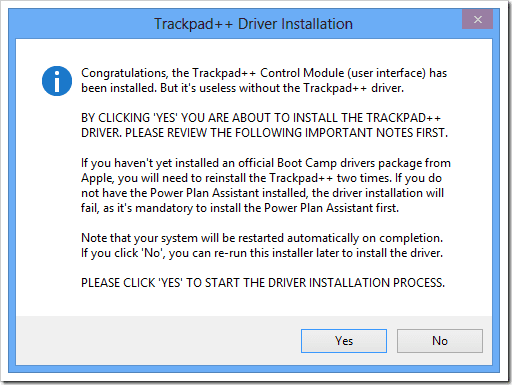 Once you machine has restarted, you should now see a message telling you that the driver has successfully installed and running functionally. 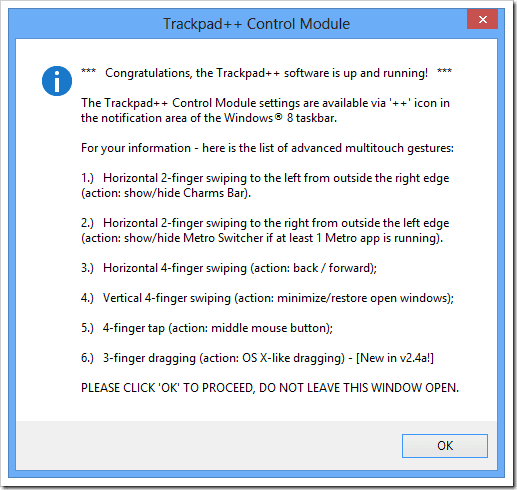 You should be able to see from the lower right corner to access the Control Module. This is the place you can further customize the gesture and how you’d like to have the trackpad respond. 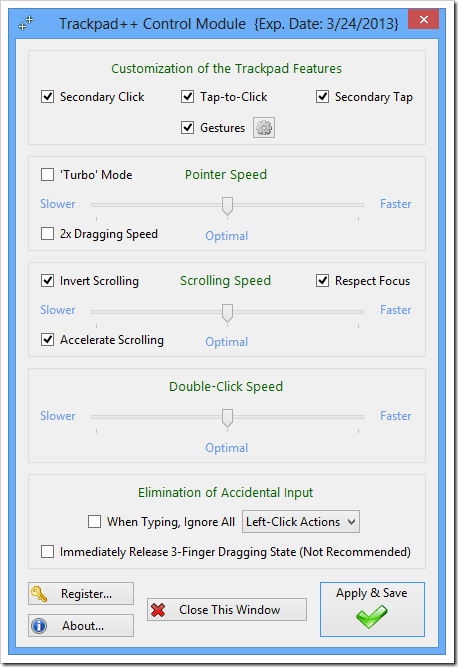 Here are all the gestures it supports for 2 fingers, 3 fingers and 4 fingers.

For Windows 8, it has an added support for swiping 2 finger from outer edge left or right. Two-finger swipe from the left will show the switch bar. Swiping two-finger from the right will show the charm bar in Windows 8. Works very well, you should defiantly give it a try if you have a Mac and running Windows.

It should be noted, if you were previously running as a virtual machine with BootCamps partition, you should uninstall the VM helper tool to avoid conflict. If you find this software to be useful, please do consider making donations to the developer behind it!