If you have a Mac running both Windows and Mac, it’s troublesome to switch between the two operating systems. Unlike a regular Windows machine with multiple operating system installed on a Mac, you won’t see a bootloader type of choice every time when turning on the machine. Instead, there are two methods you can choose to boot between the two OS. One is by changing the start up disk inside the System Preference, and the other is by holding the option key on your Mac while it starts up. The later option will reveal all the available OS you have installed on your Mac. If you find yourself constantly switching between two OS on a Mac, the chances are there are tools out there to help your life easier. 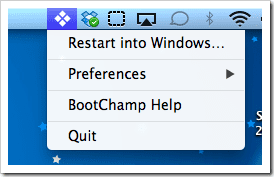 You can download the BootChamp here. When you restart your machine that has BootChamp loaded up, it will reboot into BootCamp’s Windows partition. If you have set your startup disk as Mac, the next reboot from Windows will bring you back to Mac and vice versa. By default, BootChamp will launch at the start, you can change the setting by going to the Preferences panel.

How To Build A Bootable USB Windows Environment with PE Builder

Password Booster Screen Locks/Unlocks Your Computer with Any USB Drive