The native support multiple-monitor in Windows 7 is fluid but lacks some needed features. For example, there is only one taskbar available no matter how many monitors are hooked up, meaning two out of three monitors, if, for example, you are using 3-monitor setup, will have no taskbar on them at all. Usually, it’s ok, unless you have large wide-screen or have more than 2 monitors hooked up the same time because then you would find moving back and forth to the main screen just to open the program from the taskbar is quite annoying. Indeed, it is very inconvenience.

Dual Monitor Taskbar is a free open source tool that is very good at extending Windows 7 taskbar. Once you download and have it installed on your computer, your taskbar automatically spreads itself across all monitors you are using.

The program doesn’t have a console that you can monitor or change some of the settings. Once it’s launched, it just quietly sits in the background doing its job with only less than 10M of RAM in use. 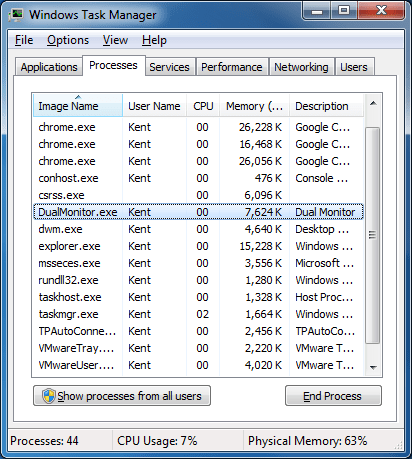 It’s very useful. I only wish it could extend my wallpaper the same time as well.