Home How to How To Find Total Number of Shutter Count for DSLR Camera on...

If you own a DSLR camera or rather any camera (via smartphone included), the photos you take will not only contain the picture itself but also additional information such as the camera aperture, focal length, shutter speed, ISO and much more other settings at the moment when the picture is taken. This is called an Exif image file standard so that across all camera manufacturer there is a shared method to capture this metadata.

Unfortunately, the Exif format does not explicitly require camera’s shutter count to be included as a part of the metadata. Some camera manufacturers will include the shutter count in the image, and some will not (i.e. Canon).

So if you are trying to find out how “old” your Canon DLSR is, one precise method is to find out how many photos this camera has taken in its lifetime, aka close to how many times the shutter has been used. An average DLSR camera can be rated anywhere between 100,000 – 300,000 shutter counts. That is quite a high number unless you are a professional photographer it’s unlikely that you will ever hit this number.

How to Find the Shutter Count

Depends on your DSLR, some have the shutter count stat embedded in the image you have taken, some might not. There are tools on the web that claims to show you the shutter count by uploading an image taken from the camera. However, most of the tools I’ve tried does not work with my model of Canon DSLR, which is an EOS 6D. Fortunately, I found this Windows utility called Canon EOS Camera Info (v1.2) that works pretty well.

You can download the Canon EOS Camera Info here.

To run the app, just need to unzip, and connect your camera to the computer and then power cycle the Camera. 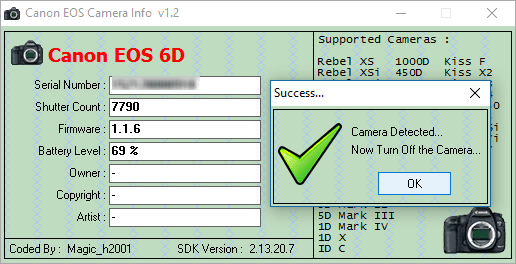 After power on and off while connected to the computer the app should detect the camera and populate some of the info accordingly. In this case, we are most interested in the number of shutters has fired.

While we are on the subject of camera shutter count, there is an interesting website that collects real user data on their shutter count of a given camera. Below are some of the counts for a Canon EOS 6D, as you can see most of the user reported are around 100,000 or above to start showing an increasing number of dead cameras.

During the research, I also found this command line tool called exiftool that allow you see more metadata on a given image. The test I ran below has over 332 attributes being extracted from Exif format. 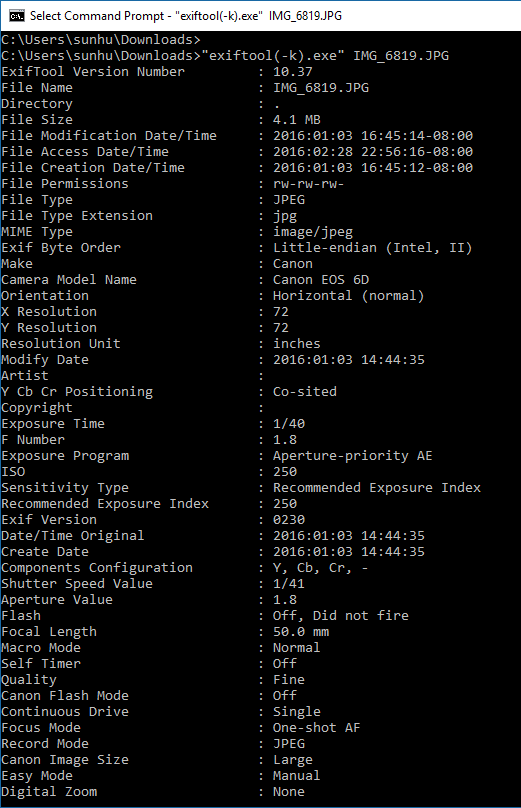 But none of those contains the shutter count, so if you are on the market of buying or selling a used DLSR. This is a must when it comes to camera life and its expectancy. Some cameras will work with the command line above, and some don’t. Hope you can find the tools that work for you so you can make a better decision when it comes to purchasing or selling a used camera. Or simply have a better understanding of your gear and its life expectancy.