Home Tips & Tricks How To Free Up Memory Usage in Windows

In most of the times, Windows manages the memory usage quite efficiently but there are still rooms to improve. And that’s why most of the System Tuning Utilities still provide options to clean up the RAM to make your PC run more efficiently. We’ve covered 4 pretty good tools that optimize the memory usage to improve the performance before and here are 2 more options to add to that list.

Empty Standby List is a command line tool for Windows that frees up the memory in 4 different ways.

To put this in more perspective, you can see how much memory is being used in each category by going to Memory tab in Resource Monitor and looking at the Physical Memory section at the bottom of the Window.

The tool works in Windows Vista and above, both 32-bit and 64-bit editions are supported.

There is a GUI tool equivalent to EmptyStandbyList if you are not a Command Line type of guy. It’s called RAMMap from the Sysinternals, which is an advanced physical memory usage analysis utility for Windows that presents usage information in different ways in details. But it also has a tab named Empty with 5 options to clear up memory usages, similar to the ones we just described above. 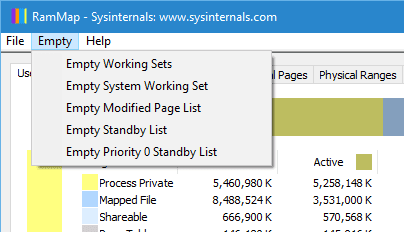