Temperature is a vital measurement  to computer. Higher temperature not only will slow down the performance, but also will make the whole system hang if it reaches to a point where the computer can’t take anymore. So it would be nice to have a tool that can monitor this measurement to make sure it’s in control, especially when in a hot and humid environment. And CPUID HWMonitor is one that can do this job and does it quite well. 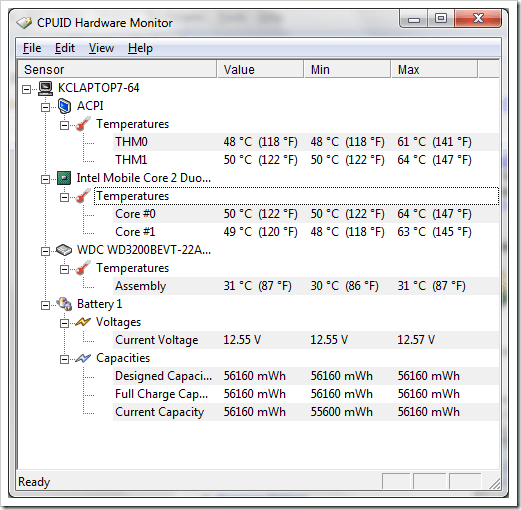 The program handles the most common sensor chips, like ITE® IT87 series, most Winbond® ICs, and others. In addition, it can read modern CPUs on-die core thermal sensors, as well has hard drives temperature via S.M.A.R.T, and video card GPU temperature.

Notice that, not like other tools we mentioned here, HWMonitor monitors and displays the temperatures to a lot more devices, not only CPU, but also GPU, hard drives, better capacity as well.

It works on almost all versions of Windows system, including the latest Windows 7, both 32bit and 64bit. Best of all, it’s a FREE tool too.