Home Tools Macrium Reflect Lets You Do Disk Imaging, Clone and Much More for...

We’ve covered tools before that lets you clone a disk image, check out some previous tools covered here and here. Macrium Reflect is yet another tool allows you to clone a disk to another disk that could be another attached local hard drive or network attached drive or CD/DVDs. The Free version is packed with many useful features on top of the basic function for disk imaging and disk clone. The only downside when using this tool is all the backup and restore images are generated into a proprietary format, other tools won’t be able to read. Apart from this, Macrium Reflect does a lot more than you might think. 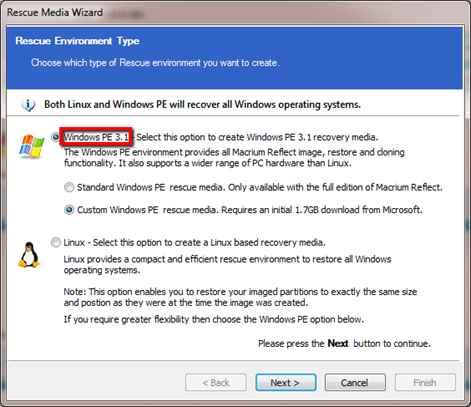 Apart from the ubiquitous disk imaging/clone and restore functions, Macrium Reflect also has a feature that lets you to create a blank Windows PE rescue media. Windows PE is short for, Windows Preinstallation Environment, it’s a lightweight Windows that mostly used by IT Pro’s to deploy Windows to workstations. Regardless, if you will be using the feature, it’s none the less a nice to have.

Macrium Reflect also Let’s you convert an imagine to VHD

VHD is new to Windows 7, if you don’t know what’s VHD we strongly recommend that you check it out here. This will come to handy if you want to boot into the new raw image without affecting your current Windows OS.

That’s it for a quick overview on Marcum Reflect, I found it to be easy to use compare to some of the other tools we’ve covered earlier. Give it a try if you are looking for a disk imaging tool.