The latest Windows Virtual PC requires processors capable of hardware-assisted virtualization with AMD-V, Intel VT or VIA VT turned on in the BIOS. Previously, we covered how to tell if your PC is ready for Windows XP mode by using two separate tools to detect different type of processors. Now Microsoft just released one simple tool that does that for you.

The tool called Hardware-Assisted Virtualization Tool, which helps you check if your PC processor supports hardware virtualization. It also checks if this feature has been turned on in the BIOS.

You can simply download the tool from Microsoft Download page. The tool is only 180KB big and is a self-executable file that doesn’t require installation. Yes, you can even add it to your portable drive.

Once you launch it, it checks your PC’s hardware and returns the result in a matter of one or two seconds. 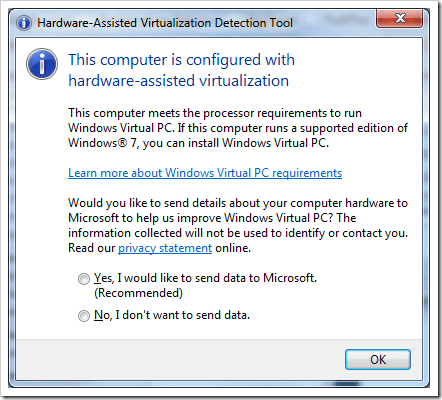 And of course, if the result is the same as above, let’s move on to the cool XP Mode.