It’s rare to see giants collaborate, even more so to see two giant tech companies in Seattle join forces to advance and bring voice assistant to a mass market. Today Microsoft and Amazon announced that each of their voice assistants will be able to integrate and work with each other later this year. 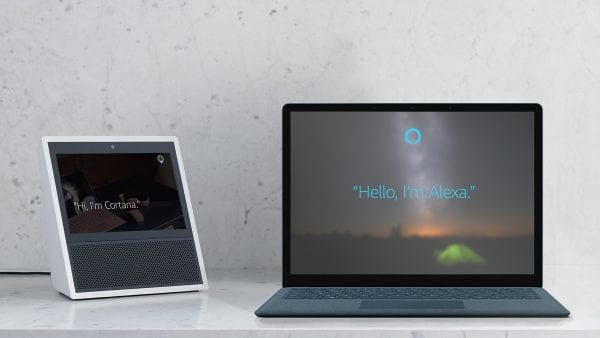 Both press releases did not provide a specific date, but only targets later this year. We can speculation either making into the fall creators update with Windows 10 updates or just in time for the holiday season. Either way, this is an interesting collaboration and seems to point finger at Google Home and Apple’s Siri in the voice assistant arena.

As Microsoft CEO, Satya Nadella, commented on the joint force between Microsoft and Amazon

“reflects our belief that when people and technology work together, everybody wins:”

With this announcement, we can see that both party will benefit from an increased reach in overall user base. Each party will gain exclusive skills that previously only existed within their own eco-system. For example, with Cortana on Alexa, all office 365’s work calendar and email deep integration can be voice activated and controlled from an Amazon’s echo device. Same goes with Microsoft’s Windows 10 device can now call out for Alexa for seamless shopping experience.

The voice assistant ship is sailing faster than ever, some say this is the new UI for the future of human vs computer interaction. We will wait and see if collaboration between Microsoft and Amazon would trigger more competitions with Google and Apple or would that be the first of many chapter of partnership in voice assistant.