Home News My Windows 7 Has Been Running Non-Stop for Over 35 Days, and... 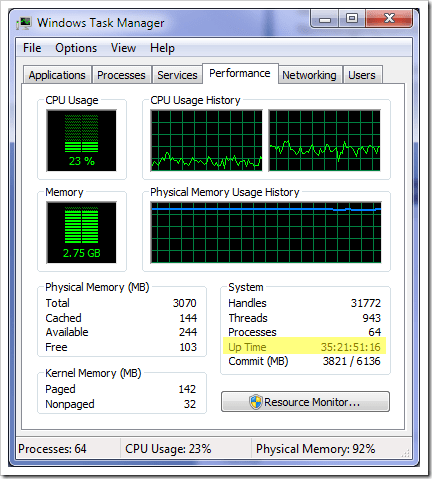 Let’s be clear first. It’s my computer at work that I heavily use every day. And I don’t even put it on sleep mode when I am off, because I have one Virtual Machine running 247 on it. So,

What type of machine I am running?

And it’s running off on native boot VHD. Yes, it’s a Windows 7 VHD image that has been running non-stop for that long. 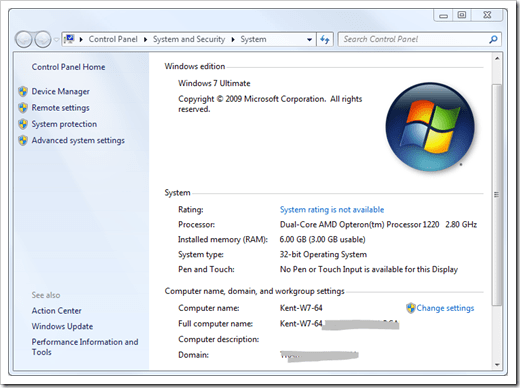 And how many applications I am running?

There are many applications I have installed since I first loaded this Windows 7 up back in May. And here are some of them that I almost use simultaneously every day.

Also, as you can tell from the screenshot above, my memory usage is almost at the top at all time. But the amazing thing is the machine still runs quite smoothly and responsively. It’s only sometimes I can hear the hard drive struggling on swapping the data when I switch between the applications.

Here it is for now, and I will be still testing and see how long it’s actually going to last. Hopefully, it can last another 21 days to reach the final Windows 7 launch day. I will be updating here for sure.

Let us know what the story you have, and how long your Windows 7 has been running.

To answer two questions I received.

A: Good question, Notice that I mentioned early  that this machine is running on native boot VHD. I actually did use the 64-bit ISO image when building the VHD image but for some reason, when I finished up and booted in system, it just showed me I am on 32-bit instead. Because the steps to make the native boot VHD take times to finish, I didn’t bother to try it again. So I left it is running on 32-bit. Maybe, I really should have tried again, considering how many apps I am actually running on the same time.

Q: Why didn’t you get the RTM when it came out?

A: Because I am on native boot VHD and upgrading Windows 7 in the VHD to a newer version is NOT supported, I am stuck in this RC right now, till I find more time to build a fresh VHD image with latest Windows 7 loaded.