Home News Steve Jobs and Mark Zuckerberg are on the Greatest Innovators List But...

Lemelson-Mit released a new survey revealed who are the heroes in young Americans’ heart when asked who is the greatest innovator of all time.

Thomas Edison was surprisingly chosen by 54 percent of the young participants as the greatest of all, while Steve Jobs came in second at 24 percent. Facebook’s Mark Zuckerberg received 3 percent and stands in 5th. 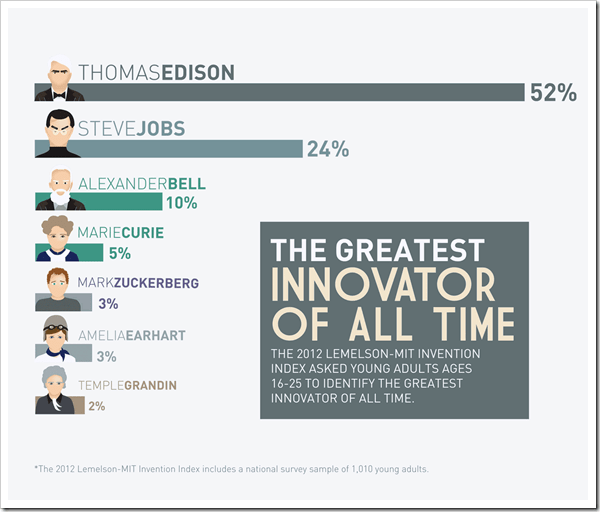 The survey was conducted by 1,000 young Americans aged from 16 to 25 using an internet-based, multiple-choice format.

Unfortunately, Microsoft and its Windows are not as appreciated as Apple and its iPhone/iPad, since we don’t see Bill Gates listed there. When asked about how new technology like smartphone and tablets influences and impacts their personal live, 40 percent of responders said they couldn’t imagine their life without it.

Well, while I am on the same page with them how much I appreciated for my iPhone, I also appreciate very much what Bill Gates and his Microsoft have brought to us. I simply can’t imagine I can live without Windows.