Home Tools Sync Files To An Encrypted Folder with CryptSync

CryptSync is an open source file syncing freeware that synchronizes your files to an encrypted location, either local or on the network. You can set up multiple syncing pairs to synchronize them all together to keep a copy of them in a format that’s encrypted and safe from being accessed unauthorized.

Download and installation are very straightforward. Once the program is started, you can start setting up the syncing pairs by click New Pair.. button. You will need to select the source folder you want to sync, and a destination folder you want to sync the files to. The destination folder can be either at local or on the network. You will also need to give a password for encryption. It’s important that you remember this password or you won’t be able to decrypt the files later on. The file names in the original folder can also be encrypted in the destination folder, if the name of the files contains sensitive information. 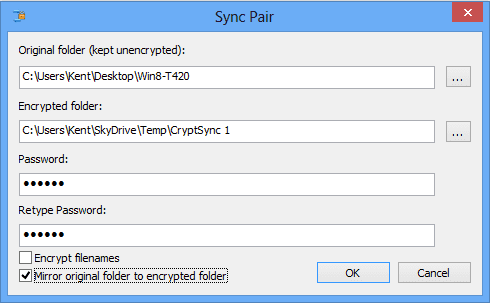 And you can set up multiple syncing pairs as well. All pairs will be listed in the program. You won’t be able to modify them but are able to delete them and add new pairs if needed. 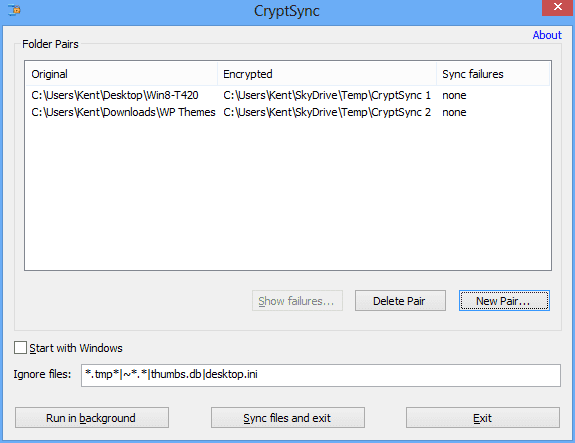 Once all set, click Run in background to start the sync process. From this point on, any changes made in the original folder will be synchronized to the encrypted destination folder at once. As you can see from the screenshot below, all files are encrypted. 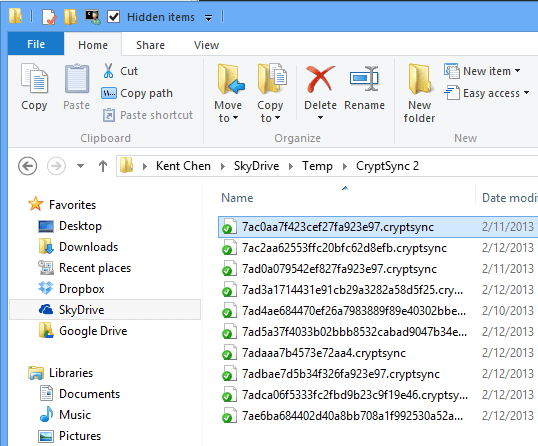 To decrypt the files on the destination folder, you can simply use any of the archiving tools like 7-Zip. You will be prompted to put in password to open the file. 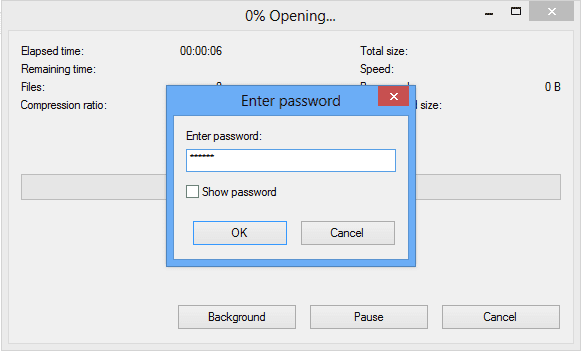 You can use CryptSync in conjunction with other popular cloud file sharing tools like Dropbox and SkyDrive, which is a good idea to make a copy of your data to the cloud in an encrypted format that keeps your own privacy uncompromised. However, if you wan to access them on the go on your smartphone, you will have to find an archiving tool that works on iOS or Android to work with, which isn’t that convenient. In that case, encrypting tool like Boxcrypt definitely works better.

CryptSync is completely free. It works on all windows platforms, from XP to Windows 8, on both 32-bit and 64-bit editions. It’s unclearly what encryption algorathm is used in this tool but based on the fact that the encrypted file can be opened in archiving tools like 7-zip, it may just utilize the archiving tool’s API to encrypt the data, which in 7-Zip case, AES-256 is used by default.