You downloaded a huge ISO bootable image but without burning to a bootable media such as CD, DVD, or USB, you have no idea if this image file actually works. You would waste one media or two if the file you downloaded is corrupted or doesn’t work at all.

Qemu Simple Boot is a free portable tool for quickly testing bootable boot-loader media, such as CD, HDD, DVD, and ISO files. As its name implies, it uses Qemu library, a generic open source machine emulator and virtualizer, to emulate a boot process from a selected media. However, it wasn’t developed to be a fully virtualization environment, so don’t attempt to test a Windows image files.

Download the tool from its website and extract it and then simply run the Qsib.exe file to launch the program. It has a fairly simple user interface that also supports the drag & drop so you can easily select the ISO file you want to test out.

You can also adjust the RAM size if you have more spare RAM left running on your system. If you are more comfortable in your own native language, you can switch the language from the Menu button.

Once it’s all set, click Start Qemu Test button to start testing out. 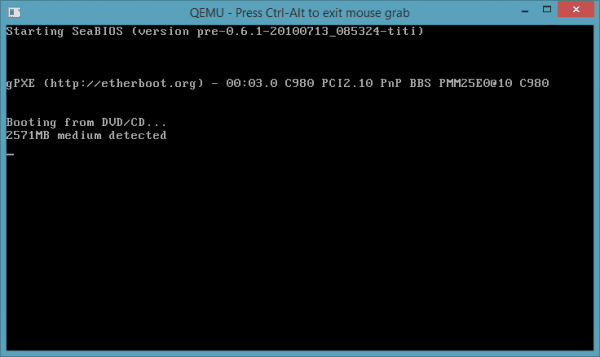 If you want to test a bootable USB drive, you will need to select HDD as the bootable media, and select the USB drive from the physical disk list before starting the Qemu test process.

Overall, Qemu Simple Boot could be a handy useful tool to test out all types of your bootable medias before you put them in real use. It works on most of the Windows systems, from XP all the way up to Windows 8 and 8.1. Both 32-bit and 64-bit are supported.