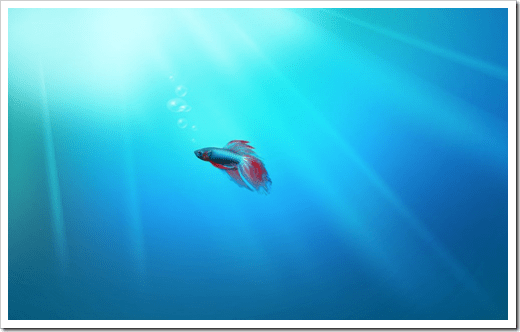 If you have used Windows 7 beta version, you might still remember this little fish that came up as the default wallpaper in beta version. But do you know the story behind it why it’s been chosen? Yes, Microsoft didn’t pick it up for no reason.

The little fish with red fin in the wallpaper is called Siamese fighting fish, also known as the Betta. It was included starting in Beta version, simply because this very popular freshwater fish is pronounced as beta. According to softpedia:

The betta fish featured in Windows 7 Beta on the default background is native of Thailand. However, Microsoft has chosen a specific variety of betta. … Nevertheless, the process of selective breeding has produced Betta splendens fish with a wide range of colors, including the blue and red, as the specimen on the Windows 7 background.

The blue betta splendens fish is still included in later Windows 7 version, but not as default as in Beta version. Because of the pretty of the image self, I believe it will be still included in the final release. Notice that, the number of bubbles in this betta wallpaper is also 7.