Windows 10 Insider Preview Build 14926 for both PC and Mobile was released today to the fast ring for all Windows insiders to review and try out. One thing that caught my eyes is the reminder in the announcement about the build expiration day. Apparently,

I immediately run the winver command in the Run dialog box to open up the About Windows window on my Windows 10 build 14915. Fair enough, it expires on October 1, 2016. 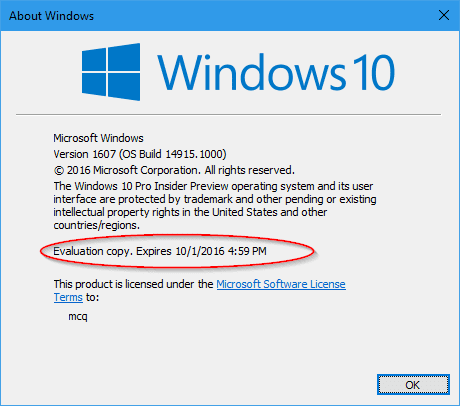 So if you are running any old or really old Windows 10 Inside Preview Build, it’s time to upgrade to the latest one that will expire May 1, 2017. That gives you more than 6 months without worrying about getting expired. Not really sure how Microsoft decides when one particular build expires. Last build 14915 which was released on August 31 expires in about month while the build 14926 released today will expire in more than half year. 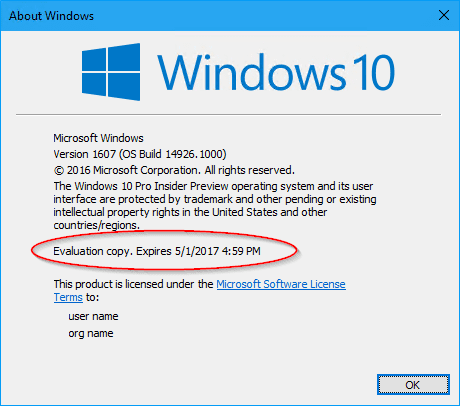 If you weren’t aware of this expiration thing, I certainly wasn’t, we all know now that we cannot run a beta version free forever. So, let’s keep moving. Besides, if Microsoft keeps the Insider program forever, we, as the insiders, get to run the latest version of Windows for free.

Note that, if your PC is running the Windows 10 Anniversary Update (Build 14393) in the Slow and Release Preview rings today, you are not affected and you will not be notified of your build expiring.