I have to admit that I’ve been having problems with Google services like Gmail, YouTube, or even regular Google Search in Chrome for quite some time, They are extremely slow in Chrome with my home workstation. How slow? With Gmail, the attachments would end up as unable to download or upload, and searching through email archive is extremely slow. With YouTube, often, it never loads the full description and comment section, sometimes video would stop play, and you have to reload the page to pick up where you left off. If you use Hangout, at times it will stuck at loading screen forever. It is important to note, this slowness only exhibits in Chrome. With this idea, I’ve tried to reset chrome’s cache, restore to default settings, use Chrome Clean Up tool to attempt to fix any other problems. All without success, Gmail under Chrome still suffers, and YouTube playback is choppy.

While researching this issue, I discovered it’s the QUIC protocol in Chrome that might cause such slowness.

QUIC is a new transport which reduces latency compared to that of TCP. On the surface, QUIC is very similar to TCP+TLS+HTTP/2 implemented on UDP. Because TCP is implemented in operating system kernels, and middle box firmware, making significant changes to TCP is next to impossible. However, since QUIC is built on top of UDP, it suffers from no such limitations.

Because QUIC protocol is based on top of UDP, packet delivery is not 100% guaranteed. And Chrome happen to have this QUIC protocol turned on by default!

Go to chrome://flags/ in your Chrome 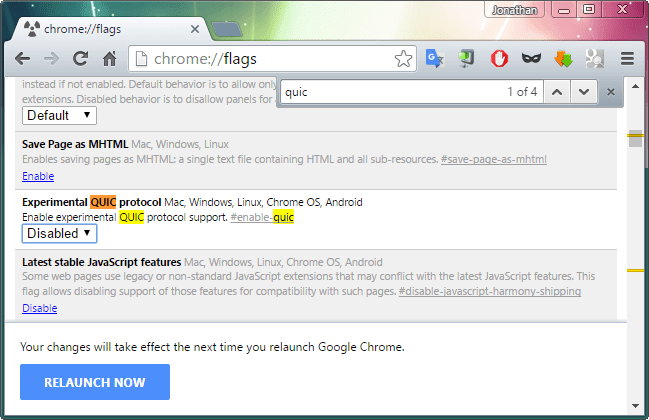 Under the dropdown for Enable experimental QUIC protocol support, make sure you change the “Default” value to “Disabled”. This will prompt you to Relaunch Chrome.

After Chrome has restarted, go back and visit Gmail or YouTube again you should notice an immediate difference regarding the speed and reliability to perform certain actions.