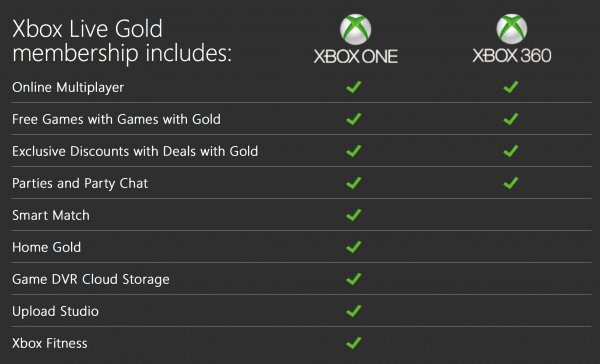 The list is some what self-explanatory, but not clear enough on what it actually means. Let’s take “Free games with Games with Gold” for example, it’s a program launched in 2013 E3 conference. What it means is that for every month you are subscribing to Xbox Live Gold, you are eligible to receive a free game. Starting this July, Microsoft has announced they are increasing the number of free games from one to two ! That means, if you are a 12 month subscriber you will receive 24 free games per year just from being enrolled in the Xbox Live Gold membership, that is averaging $2.5 per game if you signed up 12 month Xbox Live Gold membership for $59.99.

What happens when Live Gold membership expired or stopped renewing?

When you stop renewing Live Gold membership, two things will happen. You will no longer receive monthly free games offered to the Live Gold subscriber. All previously downloaded free games via Live Gold will not be playable.

What happens when you running out of disk space and delete previously downloaded free games via Live Gold ?

It’s okay to delete games from your hard drive, you still owns the title. All the free games you have collected over time can be re-downloaded as long as your Live Gold membership are active. If your membership expired, any previous games you’ve collected are not playable, in addition to that you will no longer receive free games of that duration. As soon as your account regained membership status, any previous duration that you are not subscribed to Xbox Live Gold you are not entitle to download games offered during those period of time. 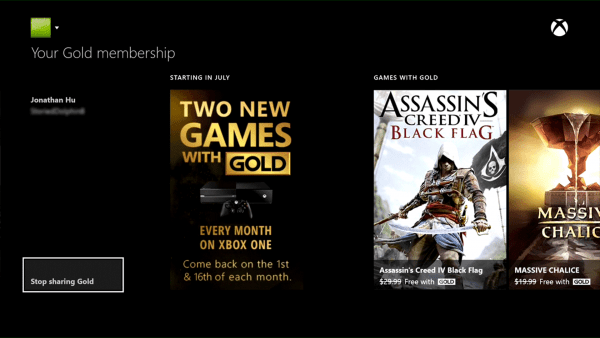 That covers what it means for Free Games with Gold. Next up “Exclusive Discounts with Deals with Gold“. This is pretty self-explanatory, as an active Live Gold member, you are eligible to purchase digital version of some games with significant discounts. Offer may vary throughout the year. You also gain more reward points when you purchase with an active Live Gold membership. However that being said, it’s important to keep in mind that 1000 Live Gold reward points are equivalent to $1 USD. The additional points you gain by being a Live Gold member is almost insignificant unless you plan to spend quite a bit on Xbox marketplace.

Parties and Party Chat, Smart Match are the features you gain with any games that offers online multiplayer game play, very self-explanatory so will not going into details on this. 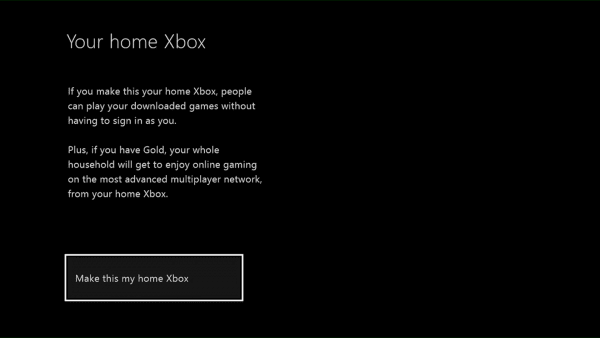 Home Gold, might be confusion to some. Essentially, what it means is that for a single Xbox One in your home you are allowed to add multiple user accounts. All the guest account are eligible to play the game you own and hence sharing at home.

According to Microsoft, the Game DVR Cloud Storage are direct related to how much cloud storage you have on Microsoft OneDrive. A free OneDrive account usually will have 7-15GB of Cloud storage. That being said, there are always ways to get more free storage space from OneDrive, and always keep an eye on any current promotional giveaways from OneDrive.

Is another addition for Xbox that Microsoft chose to only enable to Gold Live members. It’s a standalone app that acts as your personal trainer. It’s important to note Xbox Fitness requires Kinect to monitor your activity. If you are not an early adopter, chances are your Xbox One might come without a Kinect.

In the end, this is where Microsoft is generating its revenue, on the software and services side, not on the Xbox One hardware. Xbox Live Gold is actually a brilliant way to generate recurring revenue as the average price to pay for one game is out to be extremely low compare to buying games out right. The other plus side is your Game library will just keep growing every month to keeps you on the hook for renewing and extending your Gold Live membership status.