Home News When the Official Support to My Windows Expires?

Apparently, according to ZDNet, Microsoft quietly revised its support policy for consumer versions of Windows to give them a full 10 years of life time, mostly for the 2 most recent releases, Vista and Windows 7.

Windows XP is actually getting over 13 years of support from Microsoft, while both Vista and 7 get a couple of month over 10 years. No guarantee though this can be changed anytime down the road. Considering Vista is a badly failed product but still gets 10 years of support out of it, I won’t be surprised if Windows 7 gets more than XP in the future, unless Windows 8 gets extremely popular once it’s released.

Since the service pack for Windows 7 ends April 9 next year, we probably will only see one more service pack at the most. Hope we will be getting a bit of more Windows 8 features porting over to Windows 7 through next service pack.

Here is also a quite cheat sheet showing what’s covered in each support period. 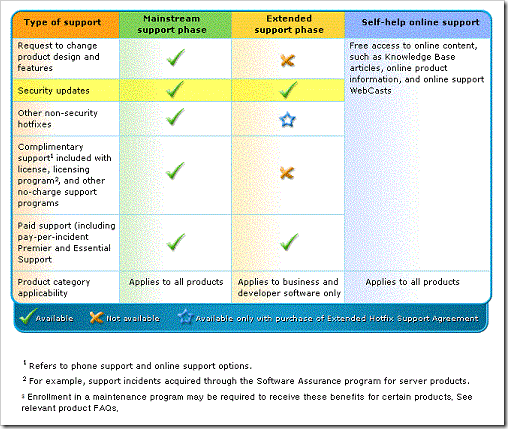 Since the service update is available through the whole lifecycle at no additional cost, which matters the most to a Windows system, 10 years of life to an Operating System is quite a support from the software giant. Considering the added Windows 8 in the near feature, Microsoft will be quite busy supporting 4 different OS for a short while.