Home News Why A Window Doesn’t Maximize Across All Monitors by Default?

Here Raymond Chen, the old new thing from Microsoft, reveals some interesting insides on this topic.

According to Raymond Chen, maximizing across to multiple monitors was the idea tried first but was found as not a good idea. Here is why if you look the example below:

It’s got even worse if the resolutions on both monitors are not the same. For example, 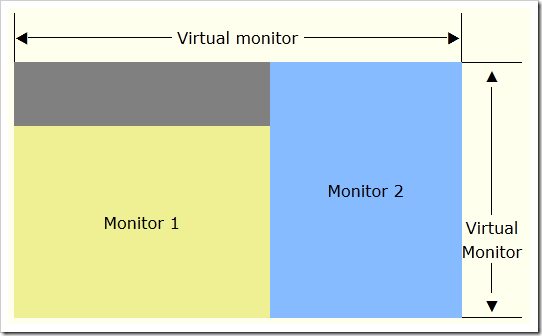 The content of the upper left corner would not be visible at all.

Raymond also mentioned that there may be cases where it would be meaningful to maximize a window across the monitors and the feature can be implemented on its own by the developers. But he went on and commented that it’s probably not a good idea doing so in a picture-viewing application. Since pictures often have people in the center, and if you maximize the picture across the monitors, somebody’s head might be cut in half on the screen.