*disclosure: we are not affiliated or sponsored by any companies mentioned below.*

Recently I just acquired a Synology DS215j, it’s a NAS Server. My main motivation for acquiring a Network Attached Storage (NAS) server is to have a better way to share common files between Windows and Mac. Specifically I want to solve the problem of editing a same set of photo libraries when using Adobe Lightroom between Mac and PC. The only way to solve this is to have a dedicated NAS server. With a dedicated NAS it allows me wirelessly access TB of data all from a portable laptop with limited hard drive storage.

Without a NAS the problem with sharing files between Windows and Mac is that each has its own preferred file share protocol. On Windows, it’s SMB (Server Message Block) / CIFS (Common Internet File System). On Mac its AFP (Apple Filing Protocol). Although Mac do support SMB client connections, often times they are very slow compare to Windows when loading a shared folder. Listing directories on a Mac could take considerable more time than on Windows.

NAS is short for Network Attached Storage, it can range anywhere between a single bay hard drive server running ARM CPU to multi RAID rack server with multi Intel xeon chips. Their primary purpose is to provide storage, in my case store mostly photos and videos. NAS Server can also be used for other tasks such as downloading tasks, VPN servers, your own mail server, Time Machine backup for Mac, iTunes server, Plex Server, source control (git,svn,mercurial) servers and many more. Bottom line, a NAS is a centralized place for desktop, laptop any mobile devices within your local network to connect and share files.

Why I choose Synology DS215j and What are your options ? 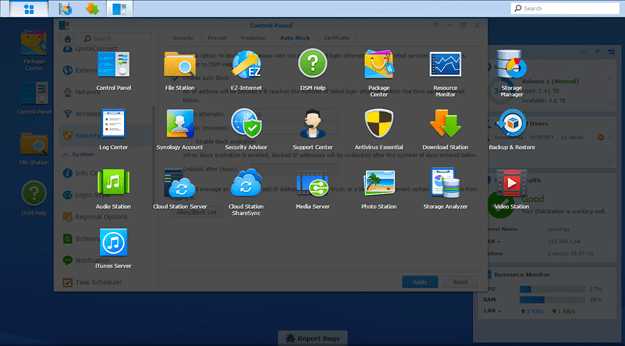 There isn’t a dominant player in NAS provider, but Synology is among one of the biggest player in the market. Before picking any commercial NAS solutions, it’s important to note that there are free open source solutions such as FreeNAS that also allows you to build your own NAS. One of the primary reason why I bought the commercial solution instead of open source DIY is the out of box experience. Every Synology NAS runs DSM (DiskStation manager). It has pretty much everything I need, and the “App Store” package center makes it easy to add functions to the NAS box. Another big advantage of getting a small NAS server for home vs. building your own desktop/server with FreeNAS or other open source software is the power consumption. Because those small NAS server are running either on ARM process or Intel Atom CPUs the power consumption are a fraction of what the standard CPU, hence over time you are saving considerable amount in your energy bill.

There are the many type of NAS out there for you to choose. If you head to Plex’s download page for NAS, you will find they support an enormous number of NAS vendors. Apart from Synology, there are NETGEAR, QNAP, unRAID, Drobo, ASUSTOR, Thecus, Seagate and Western Digital. Each has it’s own version of custom Linux software with a browser-based UI interface acting as client for you to choose from. Most of them are very similar in function. So when choosing the right NAS, you need to ask yourself what are the must feature. For example, if you need Wake-on-LAN (WoL) make sure the NAS you choose supports it on the hardware level as well as software level.

For me, picking Synology DS215j offers me

I was able to snap a refurbished model for sub $160 from Amazon, if you are in the marking of getting a NAS or start consider a NAS this is a fair good choice to get started.