A friend of Next of Windows left a comment on this post asking if there is a way to open Task Manager with Performance tab open by default. While I don’t have an answer for it, I do find an undocumented way to defaulting to Startup tab when opening Task Manager. 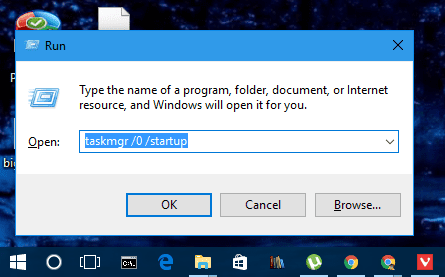 Task Manager opens up with Startup tab open by default.

The trick works on both Windows 8.1 and Windows 10 systems.

It seems that the Startup tab is the only tab that can be opened first when Task Manager is launched. I tried a few other switches but none of them brings any other tabs to open. If you know a trick, please share.

Also, the switch /0 can be substituted with other numbers like /1, /2, etc. As long as you put a switch there in middle, you should be able to open Startup folder.