Home How to Windows 7 Tip: How To Change Default Printer Based On The Network...

I have a laptop that I carry between work and home, and I also have printers at both work and home that are all installed on my laptop. Because of this, I have to remember to select the right printer every time when I want to send something to the printer. Or, alternatively, I can change the default printer every time when I switch the location with my laptop. It’s quite annoying, quite frankly, in either way.

However, Windows 7 has a very neat feature called location-aware printing that switches the default printer automatically based on the network you are connected to. It is very well buried in the Device and Printers, called Manage default printers.  And it’s only available on laptops or portable computers that run premium editions of Windows 7, because obviously it’s unlikely there will be a lot of people carrying desktops around between networks very often.

To set it up, simply go to Device and Printers screen, highlight one that you want to set as default printer, you will notice that there are more options appear on the toolbar, one of which is “Manage default printers”. And click it. 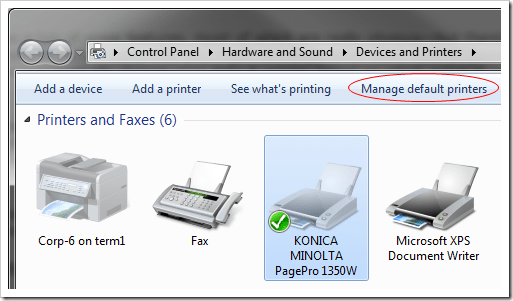 Then, switch the radio button to “Change my default printer when I change networks”, and pick up a network from the list and a printer that you want to set as default when using that network. Press Add button and the new setting will be added to the list. You can later on remove any of them from the list when needed. 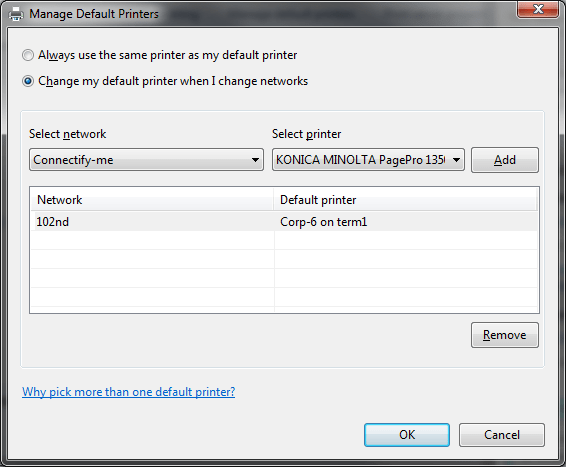 And that’s it. It’s just simple like that. From this point on, you can easily print without bothering manually switch the printer or change default printers back and forth. The default printer automatically changes every time when it detects a network change. Very useful and handy feature. Thanks to How-To Geek for sharing.