Microsoft unveiled the details lately about Windows Server 2012 Editions and their pricings. Similar approach as Windows 8, Microsoft simplified the editions down to only four for organizations to choose from. 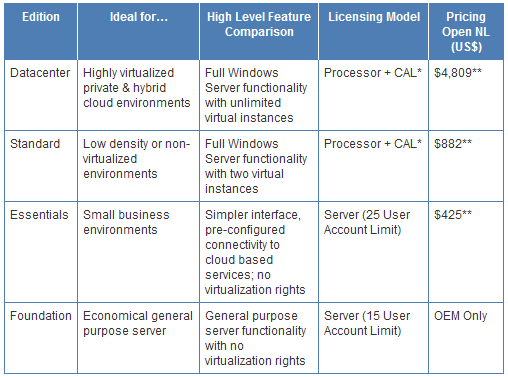 Available only as OEM with limited to 15 user account limits, the Foundation servers are aimed to small businesses that only need general server functionality with no virtualization needs.

Priced at $425 with limited to 25 user account limits. It’s also aimed to small businesses with up to 25 users in the network. The Essential servers offers pre-configured connectivity to cloud based services.

Priced at $882 with license model on both Processor and CALs, the Standard servers has full windows server functionality with 2 virtual instances. They are not made for a full virtualized environment but certainly have limited virtualization feature.

Simply put, if your environment is highly virtualized, Datacenter is the way to go. The license model allows the Datacenter to host unlimited virtual servers without additional cost. A Datacenter server that hosts 10 Windows Server 2012 Standard servers is going to save you half of the cost just on the license.

As wegotserved pointed out, a Windows Server 2012 Essential FAQ document clearly indicated that there will be NO next version of Windows Home Server after version 2011.

Q: Will there be a next version of Windows Home Server?

A: No. Windows Home Server has seen its greatest success in small office/home office (SOHO) environments and among the technology enthusiast community. For this reason, Microsoft is combining the features that were previously only found in Windows Home Server, such as support for DLNA-compliant devices and media streaming, into Windows Server 2012 Essentials and focusing our efforts into making Windows Server 2012 Essentials the ideal first server operating system for both small business and home use—offering an intuitive administration experience, elastic and resilient storage features with Storage Spaces, and robust data protection for the server and client computers.