OSToto, the company behind OSToto Hotspot (formally called 160WiFi), announced on January 11, 2018 that they ceased the support for its free WiFi Hotspot. Sorry folks, 160WiFi no more.

However, if you ended up here in a hope looking for a free WiFi Hotspot tool for Windows, there are other tools available as well.

Since Windows 7, Microsoft has introduced a new virtual WiFi Technology that natively turns a Windows computer into a WiFi hotspot. But obviously, these 8 free tools did a better job by not only taking advantage of this new technology but also making the whole process a lot easier to use.

160WiFi is a new member to the party that stands out of the crowd with a bunch of new features that don’t exist in other tools. It’s free, no ads, no popups, and is fully compatible with Windows from XP all the way to 8.1 and 10 on both 32-bit and 64-bit platforms.

Once you have followed the routine download-install-launch process, you will have a WiFi hotspot automatically with a default SSID and Password that you can change later on. 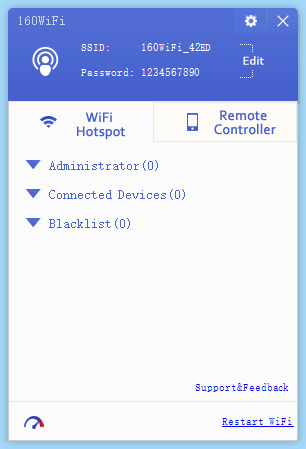 The first thing you might do when you have the tool up and running is to test your Network Speed since there is a speed test tool that comes handy right from the left bottom corner of the tool. But note that the result may not reflect the real speed of your broadband. I got two very different result when I used 160WiF and SpeedText.net on Chrome. 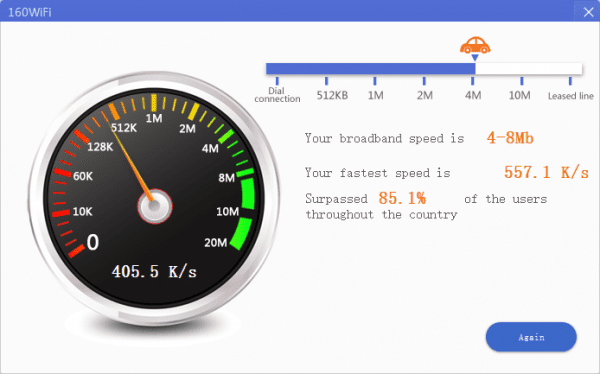 It comes with some managing features that are powerful but every easy to use.

First of all, it lists all connected devices with bandwidth monitoring in real-time. And you can set the speed limit on any of selected devices if needed. Or disconnect them manually or even put them into the blacklist to prevent them from connecting in the future. 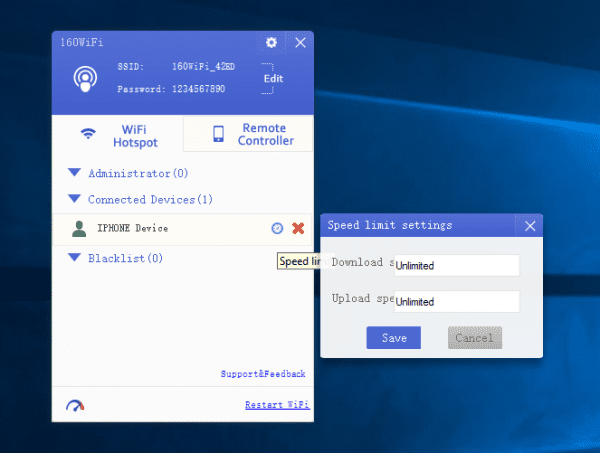 Then let’s take look its most intriguing Remote Control feature that lets you not only back up your pictures on your iPhone/Android phone but also remote control your computer right through your phone with Intelligent Control.

To achieve all these nice features, you need to install 160WiFi mobile app on your iPhone or Android devices, and then connect your phone with 160WiFi hotspot. You can get 160WiFi for Mobile by scanning the given QR code or downloading from App Store or by installing the APK of 160WiFi for Mobile.

Overall, 160WiFi is a very nicely designed and built tool that comes real handy when sharing Internet is needed. It easily turns any Windows computer that has a WiFi internet access into a WiFi hotspot with some management features that you can control who gets the access and how much bandwidth they can share. It also can be configured easily as a WiFi transmitter that extends your home WiFi coverage.

I also really like it’s complete Free approach that doesn’t inject any ads or annoying popups trying to make money, though I do wish it can be actively developed and maintained by Drive The Life, who also happens to a free Windows driver update software we covered a while back.