Home How to Buying a Cheap Mac Mini vs Building a Hackintosh – Pros and...

Early this week on October 16th, Apple announced some new additions of iPads, and a brand new 5K 27’’ iMac. However, there is also an interesting news from the announcement that introduced a brand new update to the existing Mac Mini. This new update of Mac Mini marks the end of a 2 year draw. Apple also quietly dropped the base model of the new Mac Mini to the starting price of $499. This marks a very attractive entry price for people who want to explore the Mac world with limited budget in their pocket. 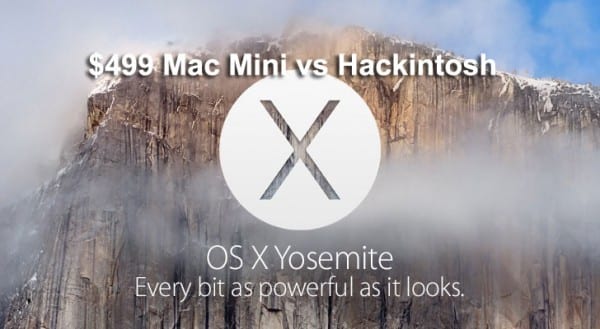 If you are a long time reader of this blog, you might know that we have a series extensive coverage on how to build a Hackintosh from selecting hardware to installing the operating system. It’s a fun and rewarding process if you are geeky enough in pursing the thrill of building you own Mac from a wide range of hardware selections with the result that is so rewarding. However, a Hackintosh is still a compromised version of Mac that doesn’t always equal a native Mac. Even though it runs Mac OS X natively, you might still not gain all the features a native Mac has, even comparing to the cheapest Mac Mini model.

Here, we listed some of the Pros and Cons in greater details on what you are gaining and losing when you buying a cheapest Mac Mini vs building your own Hackintosh. Hopefully after this, you will have a better idea of what you want to achieve.

Pros (of buying a Mac Mini vs Build your own Hackintosh)

Cons (of buying a Mac Mini vs Build your own Hackintosh)