Home How to How To Fix Mouse Cursor Lagging in Windows 10 After AMD Driver...

Remember the rule to keep everything up to date? That’s the golden rule for keeping your computer in a healthy state. Much like the “eat an apple a day keeps the doctor away” myth. Sometimes, keep ‘everything’ up to date isn’t always ideal, this is especially true if you are also running Windows 10 Insider build.

A few days ago, I updated the display driver on a newly built desktop via Windows update. You’d thought to trust every update from Microsoft in whatever is showing under Windows update, even third-party display driver. In this case, an AMD display driver below with exact driver version below (4/18/2018 – 24.20.11001.8003) was listed for one of the “Driver Updates” and I went ahead updating the driver without a second thought.

Well, things start to go south right after the driver is installed. I started experiencing mouse lag and other kinds of visual cues delay. It’s extremely troublesome and frustrating to use after a few minutes of interaction. Everything is delayed with long pause lag up to 2 seconds. It seems very obvious that the new display driver from Windows Update isn’t working as expected (at least with the hardware I have, which is an AMD Radeon™ RX 580). Sometimes, there is also truthness in “if it ain’t broke don’t fix it”. Anyhow, below are a few solutions if you too encounter mouse/cursor lag after a Windows Update.

First, we can mitigate the lag by turn on an old trick under the mouse properties setting. Go to Settings > Mouse > Additional mouse options 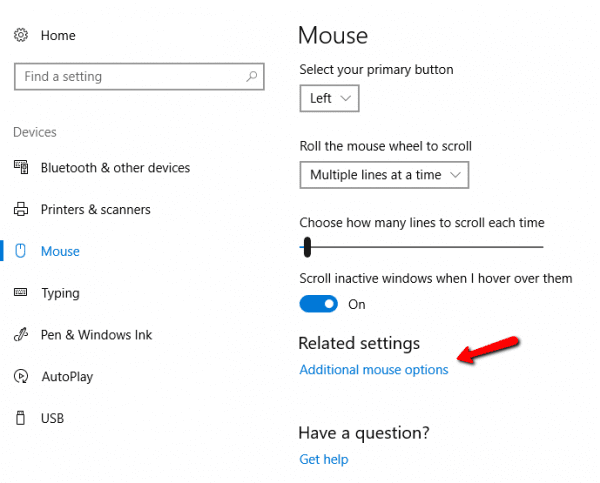 Go to “Pointer Options” and find the “Visibility” section, make sure to turn on “Display pointer trails and change the setting to the shortest possible. 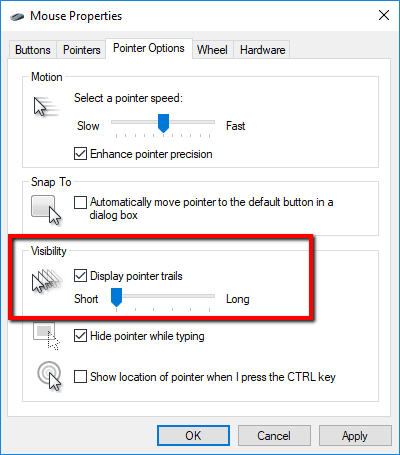 Hit Apply when you are done. By now you might still experience lag from any cursor movements, but it should be much manageable from an input and feedback loop point of view.

A proper solution is to rollback to the previous driver, if you don’t know what your previous driver version, it’s best to try to use the recommended driver from the vendor. It’s possible that your Windows 10 Insider build delivers the beta driver to you that aren’t available from the vendor themselves. In which case, if you are looking for AMD driver, be sure to use this link below to get the recommended drivers for your device.

If no success after installing the recommended driver, you should rollback to a previous version of the driver. Here is some link that’s hidden deep from AMD’s support page on looking for previous drivers, find the appreciated version that fits for your OS.

That’s it, hopefully, this resolves any mouse/cursor lag/delay after Windows update.

Well, it started happening on my computer as well ever since I installed an NVIDIA GeForce GT 710 video adapter. The mouse and screen lag a few seconds every time there is a notification popping up from the action center. It’s very annoying. Since I don’t know which drive I should be falling back too, I simply set the focus assistant to Alarms Only to minimize the number of notifications. It’s been much better.