Home Tips & Tricks How To Get Linux Command Sudo, Kill on Windows

Sudo is a popular Linux command that allows users to run programs with the security privileges of another user, by default the superuser (su). It’s a contraction of “do as su” where “su” stands for “super user”. Windows has something similar too, e.g. Run as Administrator and Run as Different User, but not in the same manner. If you want to run certain commands with admin privilege, you will need to launch Command Prompt as Administrator first and run the command. You can’t open up a normal Command Prompt window and expect to run a command that needs admin privilege.

Well, not if you have a Windows version of Sudo in place. A Canadian developer had a need for such a tool for Windows and wrote one out of that need. And he shares them on his website as well because he figured that someone may like and need them too. Well, he has to be nice to share them…because he’s Canadian.

Sudo for Windows will let you run a program as Admin, including extra command line arg. For example, doing this: 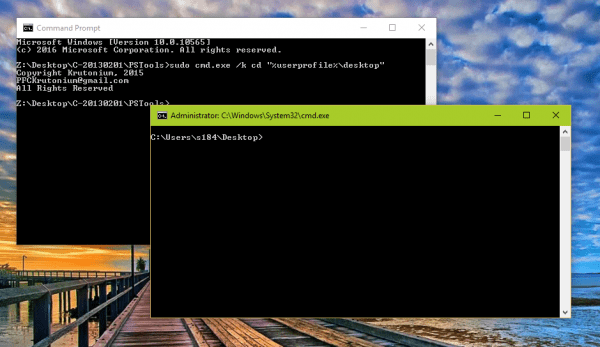 Note that an UAC prompt will still engage whenever you sudo a command to confirm the elevation.

He also made a similar tool Kill which is also the clone of its counterpart in Linux. I am aware that we’ve already had Taskkill that does the same thing and does pretty well, but I do have one thing to point out that why you will like Kill in some cases. It allows you to kill not only one particular process but also a bunch at once. For example,

Running this will terminate all programs listed at once without killing them one by one, which could come really handy sometimes.

You can also combine Kill with Sudo to kill a running program that needs the admin rights to terminate.

You can download both Sudo and Kill from , and save them in a folder listed in PATH environment variable or c:\windows\system32 to be accessible from everywhere.