We have covered a couple of nice keyboard-mouse sharing tools before, Synergy and more lately the Mouse Without Board. ShareMouse is another feature rich tool that shares one set of keyboard and mouse across multiple computers on the same network. Not like Mouse Without Board that only works between Windows systems, ShareMouse also works on a hybrid network that contains both Windows and Mac OSX systems. There is also no limitation how many computers and monitors are going to sharing.

ShareMouse is a completely free tool that also offers a portable version for both Windows and Mac, which comes very handy. It works fine on all form factors that run either Windows XP/Vista/7, both 32-bit and 64-bit, or Mac OSX Snow Leopard/Lion.

One of the beauty of this tool is its configuration-free monitor layout sensing feature. It effortlessly detects any of the computers that have ShareMouse running and automatically senses what the monitor layout would be. All happens without any user’s interactive. But, make sure don’t run the tool on the computers that are not in the same room at the same time. Or, you may interference with other people’s computer. 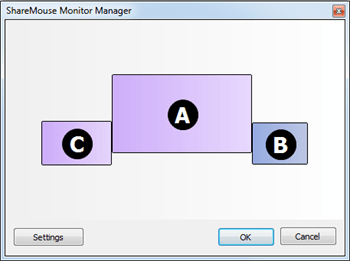 The Auto-diming feature on any of the inactive monitors is also useful to remind you which computer and monitor you are controlling. But if you don’t like it, you can turn it off by scrolling the dim bar all the way to the left in the setting window. 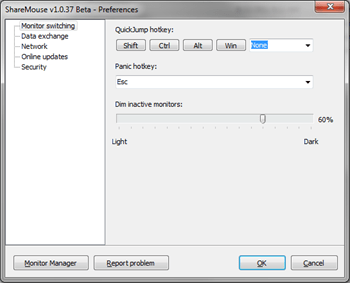 What about file sharing between the computers? And here comes an unique feature that doesn’t exist in either Synergy or Mouse Without Board. You can drag & drop any files from one computer to another with a progress bar and speedometer showing progress during the large file transmission. While dragging & dropping becomes a nature way of moving files, this feature brings the same seamless feeling while working on both computers simultaneously.

ShareMouse can also share the clipboard between multiple computers. And it works almost flawlessly. However, I did encounter an issue when trying to share the screenshots between the computers.

Overall, ShareMouse is another great candidate if you are seeking a keyboard-mouse sharing tool that is free, work for both Windows and Mac. But note that ShareMouse doesn’t work with any form of Linux at the moment, nor Apple iPad and Android Tablets.

CloudBerry Backup Free – Backs Up Windows Files to the Cloud