Home Tips & Tricks Why Outlook Spelling Check and AutoCorrect Options are Greyed Out and How...

My Outlook 2010’s Spelling Check Options (called Proofing in Outlook 2010), as well as AutoCorrect Options were all greyed out, so I don’t get the usual correct as you type feature as I usually get on my other computers. Only the basic ones, like Always checks spelling before sending, are still available. What’s going on? 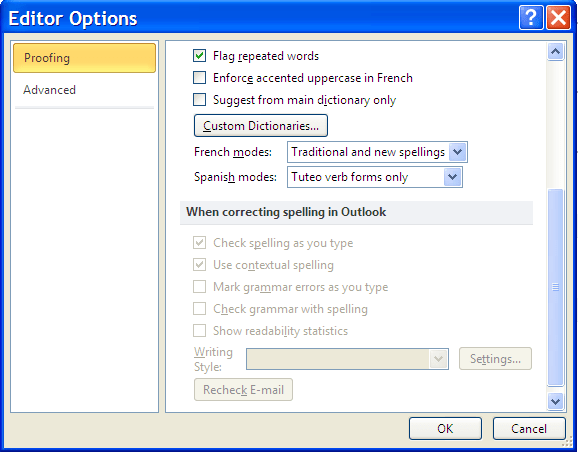 Turned out, that’s because I have a mixed Microsoft Office versions installed, running Outlook 2010 alone while Word is still on 2007. The features like Spelling Check and AutoCorrect in Outlook are integrated tightly with the same version of Word. So when Outlook couldn’t find a working copy of Word application, it greys out these features.

So, based on this observation, the workaround to get around this issue was easy:

Copy the WINWORD.exe file from Office12 folder to Office14 folder, and restart Outlook. 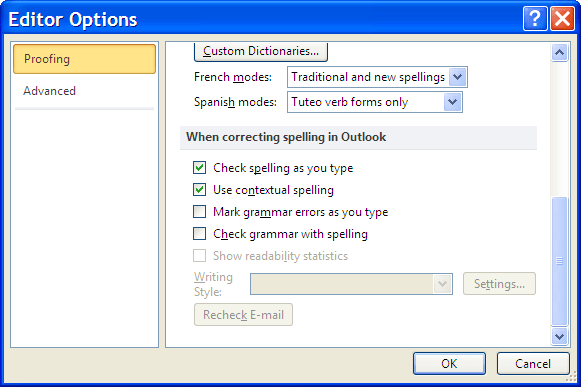 The workaround works well in a mixed installation of Office 2007 and Outlook 2010 but I haven’t tested in other combinations. It most likely will still work if the versions are not set too apart. Let us know what works for you.