There are many ways to open Command Prompt in Windows. One of them is to launch from Task Manager. As you already know, you can go to File > Open new task, type CMD in the Create new task dialog box and press OK to open it. 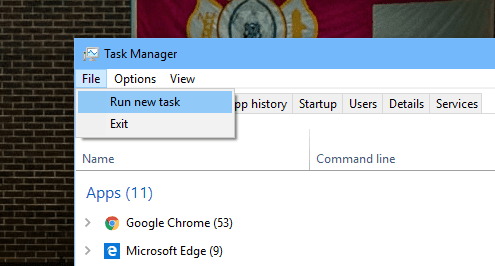 But do you know there is an even better way to open it from Task Manager? You can do so by going to File menu and Ctrl + Clicking Open new task. What’s even better is that it opens an elevated Command Prompt window that has local admin privilege.

You may ask why there is a need for having such a feature like this which seems not that useful. Well, this is actually nothing new and has lived there since Windows XP. And there is even a reason behind it.

According to Raymond Chen, it’s a rogue feature that was introduced way back in Windows XP to provide a way for developers to launch the debugging tool to troubleshoot any problems caused by the newly introduced visual styles feature.

Over time, the bugs in the visual styles all got worked out but this rogue escape “feature” has lived on and for whatever reason, it never got removed.

Yes, it works from Windows XP all the way to Windows 10.