Home How to How To Configure Mi Wi-Fi As Second Router To Extend Existing Network–Same...

As of this writing, the fastest Wi-Fi standard is 802.11ac which is about three times faster than 802.11n. If your home router is from your ISP, chances are they will not provide the latest Wi-Fi standard embedded in the “free” Wi-Fi modem/router to you. Because ISP’s Wi-Fi router is out of the box and it works most of the time, there is less motivation to push for a Wi-Fi router upgrade. Even if you do decide to upgrade, there still is a chance that you might still be stuck with the ISP’s router because sometimes the modem and router are all integrated into one unit.

Therefore, the best upgrade you can do to your existing home network is to get a second wireless router and integrate it into your current network. By integrating, it means two wireless routers serving the same SSID at the same time. And the cheapest 802.11ac router out there on the market is Mi Wi-Fi 3 by Xiao Mi.

You might have heard of Xiaomi by its budget phone, but do you also know that they make all kinds of other cool tech gadgets as well? One of them is the Mi Wi-Fi 3 router. You can find it on the sites like GearBest for less than $35 USD.

How To Setup Mi Wi-Fi 3 As Extender

Before we begin, the overall picture we want to achieve is adding Mi Wi-Fi router to our existing network. For me, my ISP is Telus, so I will be using Telus’ router configuration page as an example of how you can set up two wireless routers to serve the same network with same wireless SSID. The idea is to keep the original router as the DHCP server to issue new IP address when devices connect to the network. Because we don’t need two DHCP server issuing different IP subnet addresses, that means we need to disable DHCP on Xiaomi’s Mi Wi-Fi router. We also need to make sure the first router reserves a static IP address for Mi Wi-Fi, this is to avoid DHCP IP conflict if the additional router isn’t running on a static IP. Lastly, we need to make sure that the second router will have the same wireless configuration as the primary router. Below is the recap of what we need to change to make it work.

To start with ISP configuration changes, you want to login to the admin UI. Try to locate settings like static IP or DHCP Reservation. 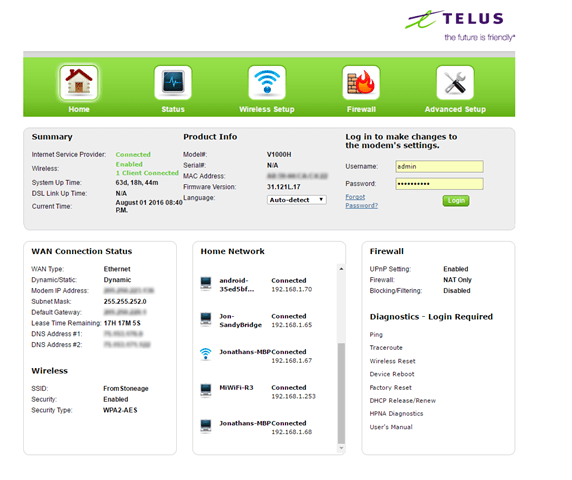 The goal is to assign a static IP address based on the MAC address of your second wireless router, in this case, it’s our Mi Wi-Fi 3. Here I’m reserving the IP 192.168.1.253 as the router IP address. 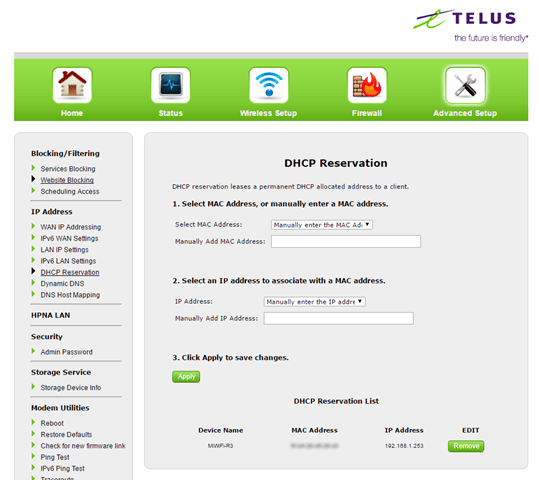 Once we set up the IP, proceed to the next step, configuring Mi Wi-Fi 3 router.

Because Mi Wi-Fi only comes with Chinese UI, you need to first install Google Translate extension to understand where to look for settings with its admin UI. Once you have it installed, activate the extension by clicking “Translate this page”. 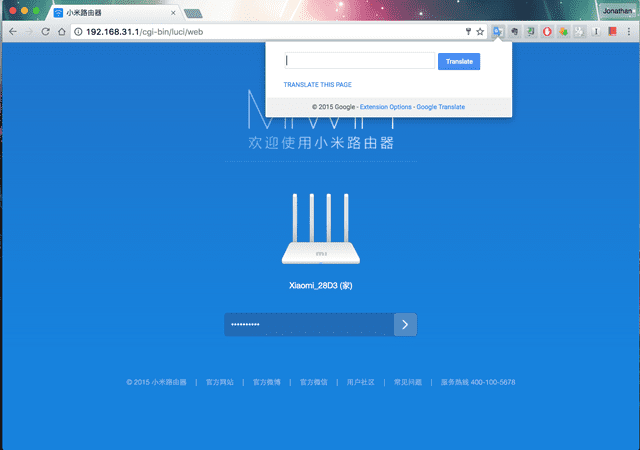 This is the home page of the admin UI. We need to go to Common Settings, (at least that’s what Google translates to) third tabs from the top. 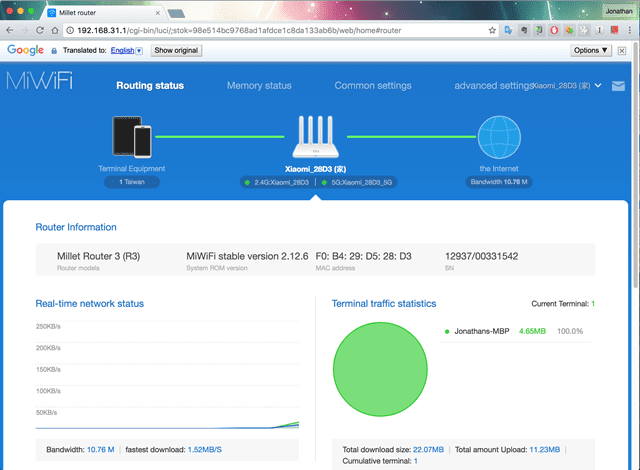 The first thing we want to modify is to enable dual Wi-Fi mode, toggle the “Wi-Fi dual unity” essentially will combine both 2.4G and 5G radio into one wireless network. It will auto detect which radio is the best option for you when a given device attempts to connect to the network. 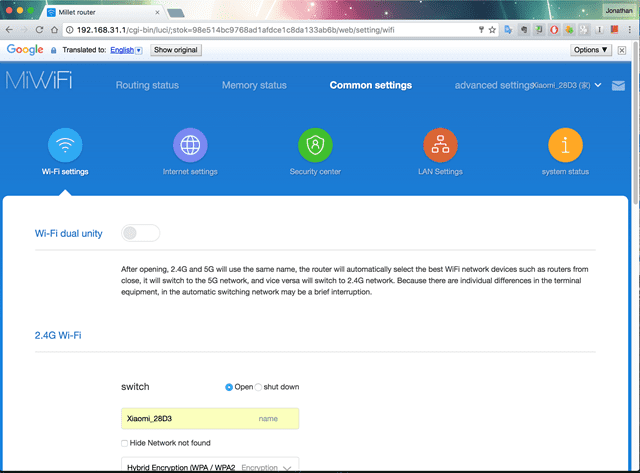 Once you have done this change, it will restart your Wi-Fi. Also at this page we need to configure the merged Wi-Fi network into the same SSID and same encryption settings and password as your primary wireless network. This is a crucial step to ensure you have consistent roaming wireless network. 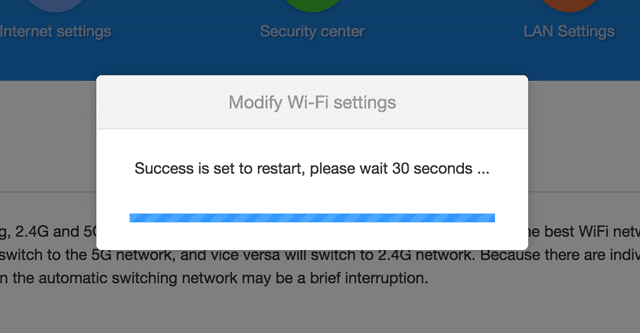 Next, go to “Common Settings” again and go to LAN Settings. 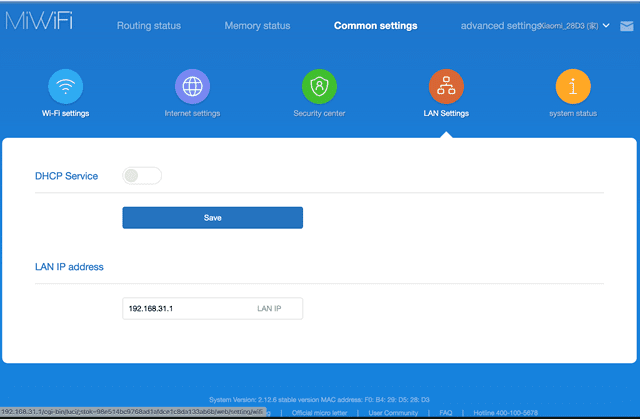 As we have stated earlier, we want to disable the DHCP Service on this router. 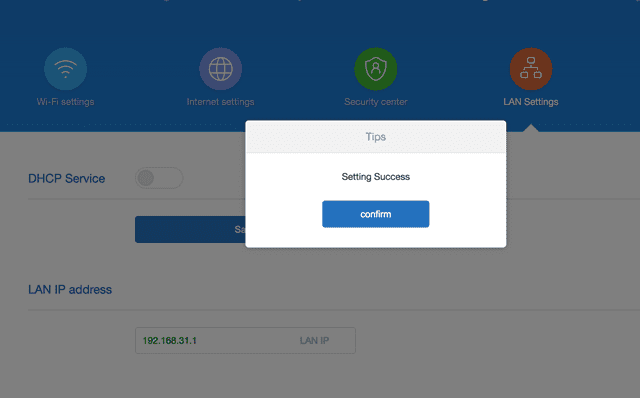 Confirm to restart, after it’s restarted you NEED to make sure the Ethernet that goes into the Mi Wi-Fi router is connected to the local LAN instead of the “internet” section. That’s because we want to make the second router act as a local network extender, whichever device connects to the local network will have internet access via the primary router. 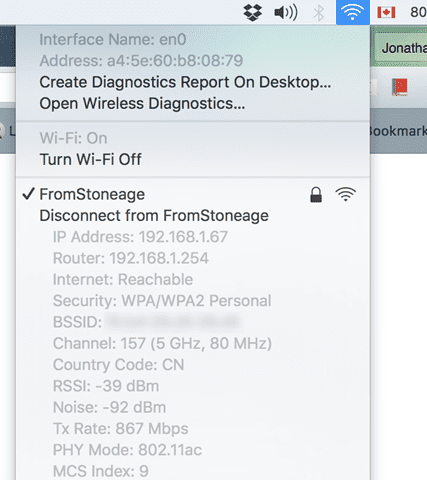 Lastly, verify if the change works, you can try to connect to the “new unified roaming” wireless network and attempt to verify if our device can physically connect to the new 802.11ac network. If you have a Mac, it’s easy to find out the details of the network by pressing and holding the “Option” key and click the wireless icon from the menu. Here you can see that our PHY Mode: is on 802.11ac. Whoa Success!