So you just bought an AAA game from the Microsoft Store over the holiday. Games such as Forza Horizon 3, can take up as much as 60GB of disk space. If you have Windows 10 installed on a limited SSD drive chances are you don’t want it filled up quickly. Microsoft has considered this limitation and offer the choice of which drive to be installed during the purchase. Unfortunately, this function doesn’t work exactly as advertised under latest Windows 10 Insider Preview. (as of this writing Version 1709 OS Build 17046)

I’ve recently downloaded a game to be specifically installed on none Windows drive but when the game finished installing it was saved to C drive instead of D drive.

If this happened to you, don’t worry. Do not panic and don’t attempt to look for the folder on where games are installed and move it without proper method. If you wish to move games from WindowsApps folder this is how to do it. 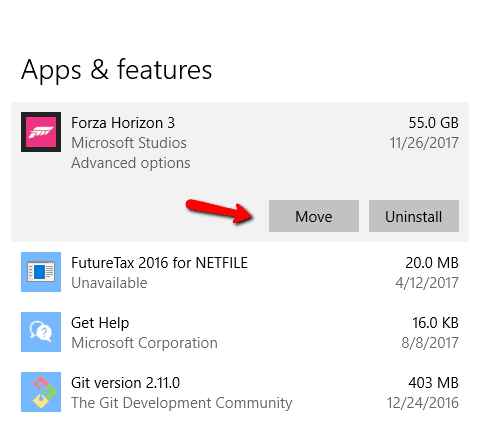 Find the game and select > Move 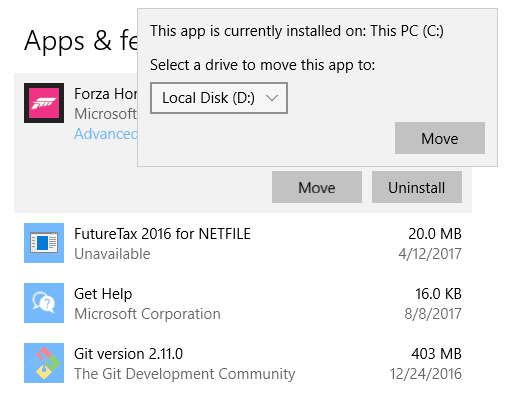 There is an additional prompt showing a list of available drive you can move this app. In my case select “Local Disk (D:)” moved the game from C drive to D drive after it was already installed under Windows partition. It’s important to note that not all games or apps have this feature to move to a different drive. For traditional Windows apps, there is no such option as “Move” only Uninstall available. If you found yourself out of disk space due to games or large apps from Microsoft Store installed under the wrong location, don’t worry this is how to fix it by moving it out of Windows partition.