Home IT Pro GB (Gigabyte) and MB (Megabyte) is NOT What You Think Is In...

When we talk about digital file size, we use measurements and units like Megabyte, Gigabyte or Terabyte. Little you might not know, what’s displaying in your Windows Explorer are NOT the same unit you had thought. Windows calculates file size in MiB (Mebibyte), GiB (Gibibyte) and TiB (Tebibyte) BUT displays them in MB, GB or TB. The differences are

That means depends on how you are looking at the data, Windows is either making it arbitrary less than what it may appear or your file would grow in size when viewed from a different platform. Below is an example illustrating the same file with the exact same number of bytes, but showing different size in kilobytes between Linux vs Windows. 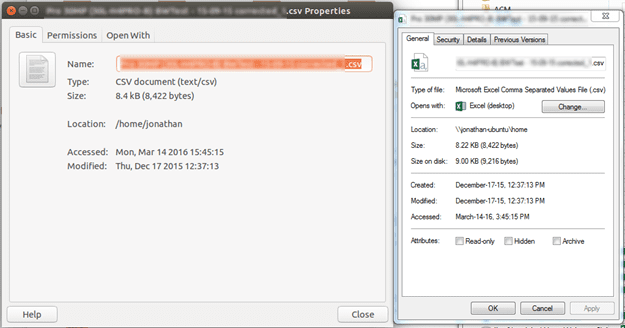 A 8,422 bytes of CSV file displays 8.22 KB under Windows Explorer, and the exact same file under Linux it’s showing 8.4 KB. The latter is a more accurate representation of kilobytes.

By now you may ask, so why is Microsoft doing this to mislead their users? There is a post by Raymond Chan, a long time Microsoft Developer shed some light on the history and the reason behind such unconventional units and why it decided to not use the guidance of the IEC.

Because nobody else is on the program either.

In other words, the entire computing industry has ignored the guidance of the IEC.

Sometimes such difference is insignificant, however as the unit grow larger the different between the two measurements will grow. If you need an accurate file size reader, do not look at the shorten KB, MB or TB units. Instead, focus on the number of bytes, this number yields the same regardless which platform and it shows exactly how large the file is in bytes.