If you have been in the field long enough, you probably have a number of favorite command lines that you learned and use on a regular basis and that probably includes IPConfig, Ping, and NSLookup. While we are moving into the PowerShell realm, it’s nice to know what the equivalents are in PowerShell for these 3 popular network command lines.

If you are using IPConfig for showing IP address info for each network adapter installed on a Windows computer, here are 2 PowerShell cmdlets that do the similar functions. 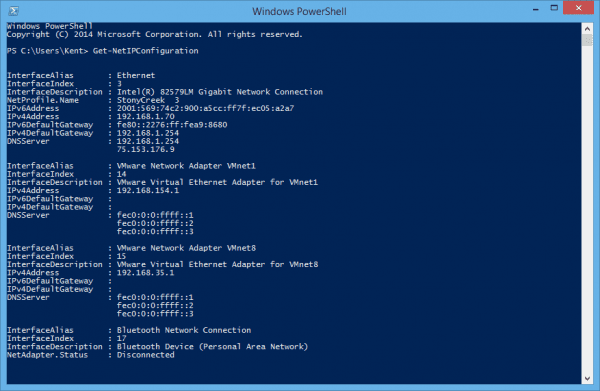 The equivalent in PowerShell is Test-NetConnection cmdlet that displays diagnostic information for a connection. The output includes the results of a DNS lookup, a listing of IP interfaces, an option to test a TCP connection, IPsec rules, and confirmation of connection establishment. 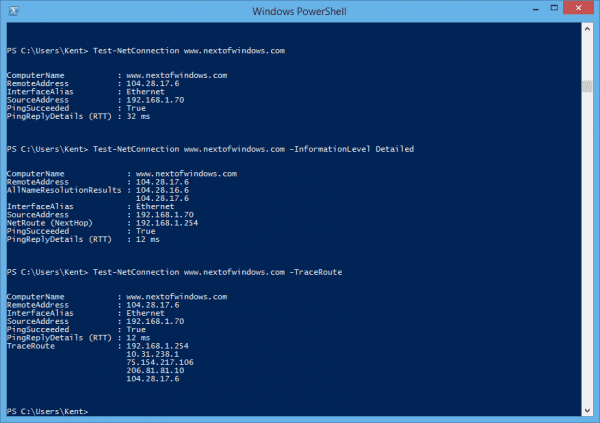 Noticed the last command line in the above screenshot? Using Test-NetConnection with the -TraceRoute parameter shows the IP route to a host, including all the hops between your computer and that host. A complete equivalent to Tracert command line, isn’t it?

The equivalent in PowerShell is Resolve-DnsName cmdlet that performs a DNS query for the specified name. One of the nice things to use this PowerShell equivalent is that you can specify a different DNS server to perform the DNS lookup, very useful when doing the DNS related network troubleshoot.

That’s it for now…hope it helps.