In terms of performance monitoring on Windows, we have Task Manager for basic real-time monitoring on CPU, Memory, Network, and Disks usage. We also have Resource Monitor to monitor these resources in more details, such as displaying which processes are occupying all disk activities, etc.

We also have Performance Monitor to examine our systems more in-depth, in terms of measuring how programs you run affect your computer’s performance, not only in real-time but also by collecting log data for later analysis as well. Most of the time, it uses what’s called Performance Counters to measure how well the operating system or an application, service, or driver is performing. Often times, these counters can help determine system bottlenecks and fine-tune system and application performance.

There are many counters we can use in Performance Monitor but here in this article I am going to list 10 very important performance counters that really matter and that you should know of.

If you are on Windows 8, press Win+S to bring out the search charm, and type “Performance Monitor” in the search box to find the tool.

Or, simply press Win+R, type in “perfmon“, and hit Enter to launch it.

To add a specific counter

Just right-click on the chart area, and select Add Counters from the context menu. 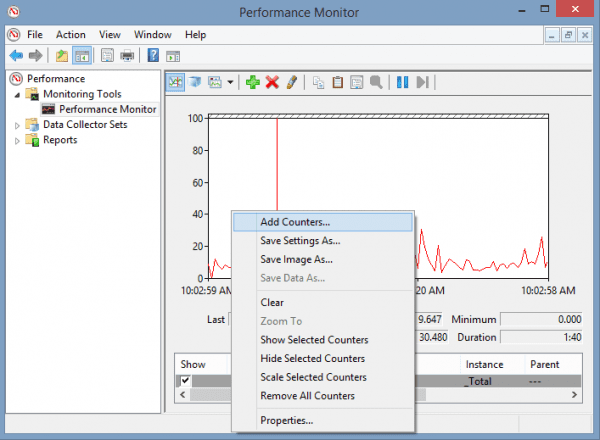 10 important counters you should know of and their recommended values

Now let’s take look what matters the most:

The PhysicalDisk counters monitor disk drives on the computer. Their numbers are the sum of the access to all partitions on the physical instance, not strict only to the logical drives. Here are 4 of them that you should not miss.

1. PhysicalDisk / % Idle Time – should not be less than 60%. Preferably staying at the top of your chart at all time.

2. PhysicalDisk / Avg. Disk sec/read – should not be higher than 20ms.

3. PhysicalDisk / Avg. Disk sec/write – should not be higher than 20ms.

Both (2) and (3) are the ones in Performance Monitor to measure the IO latency. The higher number usually indicating a problem that is hard disk related, either a program that constantly accessing the disk more often than usual, or a hard disk is failing.

4. PhysicalDisk / Current Disk Queue Length – should not be higher than 2.

The Memory counters are great resources to identify if your system is suffering because of the memory-related bottleneck.

5. Memory / Available MBytes – minimum 10% of memory should be free and available. Less than that usually indicating there is insufficient memory which can increase paging activity. You should consider adding more RAM if that happens.

6. Memory / Pages/sec – should not be higher than 1000. A number higher than that, as a result of excessive paging, usually indicates there may be a memory leak happening.

7. Memory / Cache Bytes – indicates the amount of memory being used for the file system cache. There may be a disk bottleneck if this value is greater than 300MB.

These will be a great resource to diagnosis potential network bottlenecks.

8. Network Interface / Bytes Total/sec – measures the rate at which bytes are sent and received over each network adapter.

If the chart view doesn’t fit so well, you can switch it to Report mode to have a better picture of what’s been monitored. 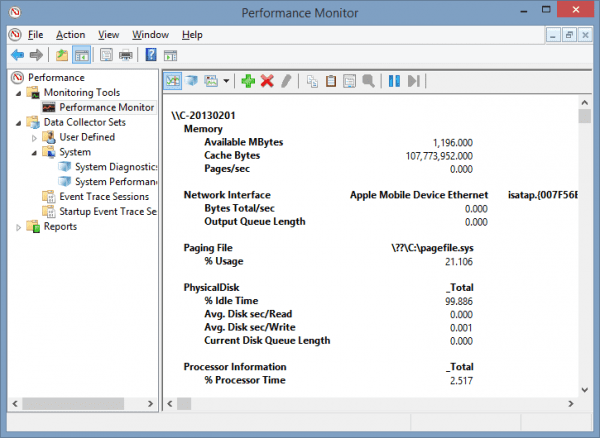 Immersive Explorer Is a Windows 8 Style Explorer Alternative For Windows...

Better Manage Your Clipboard with ClipClip