Want the simplest recipe to boost your computer with high performance that launches applications lightning fast? Replace your regular spindle hard drive with those SSD drives. It’s just that simple. You will see the result almost instantly and feel the money being well spent. But due to SSD’s nature, how do you keep your SSD in top-notch to keep up that high level of performance? Windows 7 has features that optimize SSD in good ways out of the box, and Windows 8 has made a lot of improvements on top of that to keep your SSD in good hands. And Windows 10 treats SSD drives even better.

However, as time goes on, things may change and settings could be altered for some reason. By then, you will need some good tools handy to take good care of your expensive weapon and to keep it in good shape to serve you better. And here are a list of good ones that definitely worth your attention.

5 free tools to analyze your SSD

CrystalDiskInfo is a hard drive utility that checks your hard drive’s read/write speed, monitors the health status and temperature, and supports S.M.A.R.T. It supports not only SSDs but also the other types as well, including those externally connected via USB. It provides both installable and portable version. With installed version, the tool can monitor all your hard drives on your system in real time from the system tray.

SSD Life is a free health diagnostic tool developed specifically for SSDs to address lifespan issue in SSD to notify you well ahead before it dies on you so that you have enough time to get prepared. It has a portable version that provides the status report whenever you run it, as well as a installed version that can monitor the status in real time and info you whenever it detects a critical situation.

Note that SSD Life is no longer free but its free trial version is good enough to gather the information you are looking for.

SSDReady is a tool built to monitor your SSD daily writes and measures your daily usage to provide a better idea, ahead of time, of how long your SSD drive will last in your computer. You will need the tool constantly running at the background monitoring SSD’s activities to get a better picture of what’s coming.

DiskCheckup allows the user to monitor the SMART attributes of a particular hard disk drive. SMART (Self-Monitoring Analysis and Reporting Technology) is a feature on a computer’s hard disk for providing various monitoring indicators of disk reliability. If SMART is enabled on a hard disk, the system administrator can receive analytical information from the hard drive to determine a possible future failure of the hard drive.

HDDScan is a freeware utility for hard drive diagnostics (RAID arrays, Flash USB and SSD drives are also supported). The program can test storage device for errors (Bad-blocks and bad sectors), show S.M.A.R.T. attributes and change some HDD parameters such as AAM, APM, etc. It can be useful for performing the regular “health test” for your drive and predicting its degradation, so you will be able to prevent data loss and backup your files before it happens. 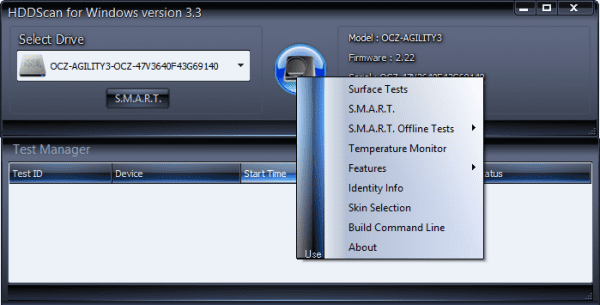 CrystalDiskMark is a freeware hard drive benchmark utility that measures the read/writes speed of your hard drives, not only SSDs but also other kinds, regular HDs, USB flash drives, as well as SD Cards. It tests your hard disks in 4 methods, Sequential reads/writes, Random 4KB/512KB reads/writes, and an additional 4KB in QD32 mode test.

AS SSD is another free portable hard drive benchmark utility that measures your SSD’s performance in overall. Compare to CrystalDiskMark, AS SSD gives you a score after the test in each Read and Write category, as well as in overall.

Tweak SSD a disk utility focusing on optimizing SSD performance on your Windows 7 and Windows 8 system. Though the SSD optimization on both systems is already superb, Tweak-SSD offers some features that can make your already-fast SSD even faster with reduced read/write disk access. It’s designed specifically for Windows 7 and Windows 8 on both 32-bit and 64-bit editions. It has a completely free version but unfortunately, the TRIM performance optimizer feature is only included in the Paid version.

SSD Tweaker is another all-in-one SSD optimizer that optimizes and restores the performance of your SSD not only in Windows 7 and 8 but also in XP and Vista as well. What’s nice about this tool is that it comes with a feature that does a System Restore upon the use to make sure you can reverse any changes you made through the tool and has a reset to default config to take your computer back to the original state.

SSD Fresh, by AbleSoft, is another free hard drive utility aiming for optimizing your SSDs for Windows. It’s a very simple tool that checks your current settings and then suggests what and which areas have the rooms for improvements. The Optimization tab is where you need to focus on. It lists a number of settings in your Windows that need to be checked and optimized. The items with a Question mark are questionable for optimization, meaning OK to leave it as it is. The items with Green Check mark are the ones that have been done optimization, obviously. And those items with Red Exclamation mark definitely need to be checked triple times to make sure if they are absolutely necessary to leave it activated. You can simply click the Optimize button to optimize all settings listed in the tool.

Fancy Cache isn’t necessary a hard drive optimization utility but rather a utility that has a fancy feature that boosts your computer performance by transparently storing data into memory so that the future requests for the same data can be performed directly from the memory. It also has a feature called Defer Write that consolidates multiple writes to the same addresses into one writes to reduce a lot of redundant writes to significantly expand your SSD’s lifespan. If the lifespan of your SSD is your main concern, you definitely should check this one out.

Wiping out your SSD

Due to the unique writing mechanism designed in SSDs, none of the tools mentioned in our Data Wiping Guide will work well when it comes to SSD drives. Some researches even revealed that the data from the SSD that has been erased is able to be recovered more than half of the times.

The best way to make sure an SSD you gave away or recycle don’t contain any of your personal data is to encrypt it. With a proper software and long enough password, it’s guaranteed that nobody could ever recover your data from an encrypted disk. We have to mention TrueCrypt since we are talking about the encryption here. It’s a free, open-source encryption tool that can pretty much do everything, encrypting from files to partitions, and to the entire drive, and operating system.

Since both Windows 7 and Windows 8 have the optimization done to SSD out of the box, we recommend using those analysis and benchmark tools before applying any of the optimization changes. The optimization tools listed in this post are great but use them wisely only when the performance on your system decreased due to the status on your SSD. Some of the over-done performance optimize will do more harm than help to your SSD that not only reduces the lifespan of it but also decrease your overall computer performance.